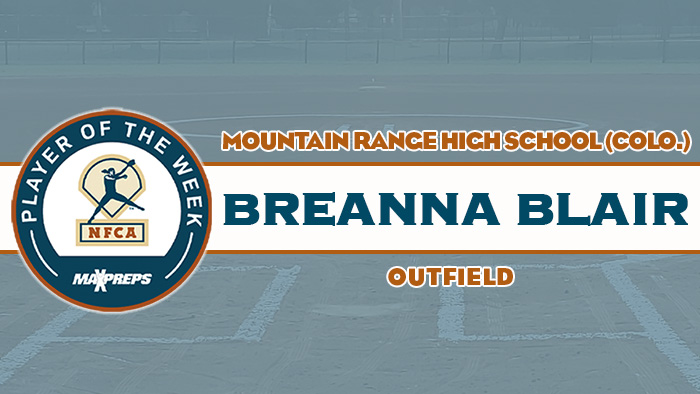 LOUISVILLE, Ky. –  Mountain Range High School’s (Colo.) Breanna Blair was named 2022 MaxPreps/NFCA Fall High School Player of the Week on Tuesday afternoon. Blair is being recognized for her outstanding performance during the week of Aug. 29-Sept. 4.

Blair was a force at the plate for the Mustangs in two contests last week, going 5-for-6 (.833) with six runs scored, a double, two triples, two home runs and 11 runs batted in. She had two homers and seven of her week’s RBI in a rout of Adams City, and collected three more extra-base hits and four RBI in an easy victory over Fairview. Blair scored three runs in each contest, as Mountain Range (6-0) remained perfect for the season.

on Mondays during the fall season, with the exception of this week’s Tuesday announcement, due to the Labor Day holiday.