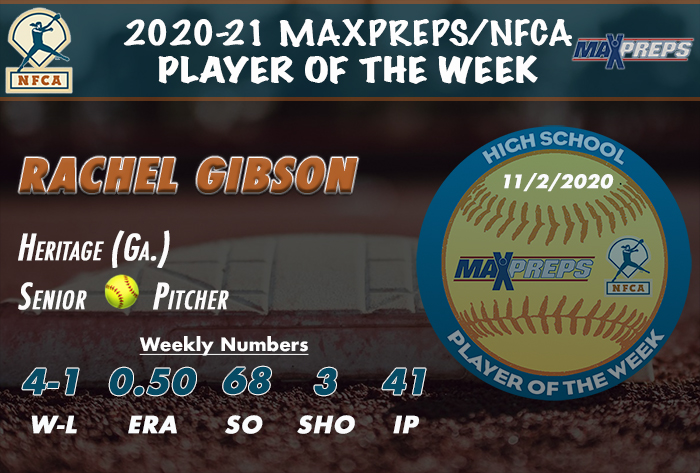 Gibson started seven playoff games, posting a 4-1 mark with five complete games, three shutouts and two no decisions. The senior posted a 0.50 ERA, allowing eight runs, only three of which were earned, and struck out 68. She scattered 20 hits and walked nine in 41 innings of work. She posted two shutouts in the GHSA state playoff final against Bainbridge and then saved the other one for the winner-take-all title game against Central.

Against Bainbridge, Gibson twirled three and two-hit shutouts, respectively. She fanned 13 in a 1-0 game-one victory and followed that with 11 more punchouts to help secure the Generals’ spot amongst the final four. Following a wild 16-5 10-inning win in the state opener, Gibson struck out 17 and surrendered two unearned runs in a tough eight-inning defeat against Central High School.

Following two shutout innings against West Laurens, Gibson dug deep and provided 14 pivotal innings against Central. She tossed a one-hitter with nine strikeouts and no walks to force the deciding game. In her final prep start, Gibson scattered five hits, fanned ten and again did not issue a walk in a 4-0 victory. Over the course of the championship day, she allowed two unearned runs on six hits in 16 innings. She struck out 22 and did not walk a batter, while also driving in two runs at the plate.