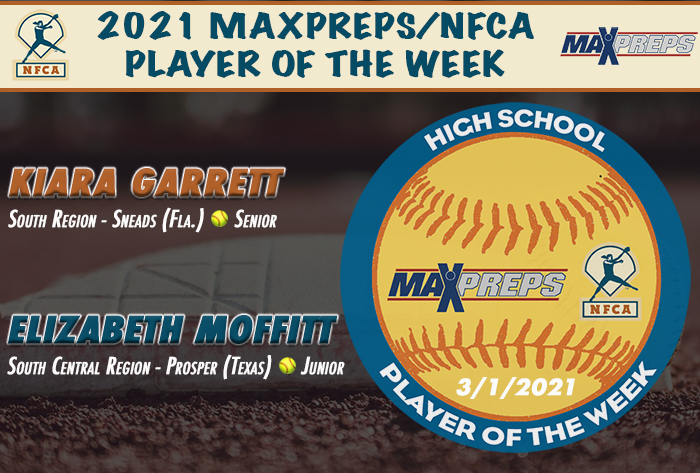 Garrett was a perfect 9-for-9 at the dish with seven doubles, seven RBI and seven runs scored, helping the Pirates win their first two games of the season. The senior outfielder slugged 1.777 and finished with a 2.778 OPS, while also swiping seven bases on seven attempts. In the season opener against Graceville, Garrett doubled in all four at bats with three RBI and three runs scored. One day later versus Altha, she registered five hits, three of which were doubles, drove in and scored four runs apiece.

Moffitt keyed the Eagles to a 5-1 start by hitting .722 (13-for-18) with six home runs and 18 RBI. She also scored eight runs, slugged 1.888 and reached base at a .750 clip. In the first three games, Moffitt went 8-for-8 with three doubles, three homers and 12 RBI. In a victory over Cedar Hill, the junior was 3-for-3 with two long balls and seven RBI. Two games later, Moffitt posted two more home runs, four RBI and three runs scored in a triumph over Bishop Lynch.

The MaxPreps/NFCA High School Players of the Week are announced on NFCA.org every Monday during the spring campaign with a player from each of five separate high school regions being selected. In the fall season, one representative is chosen from the participating regions.