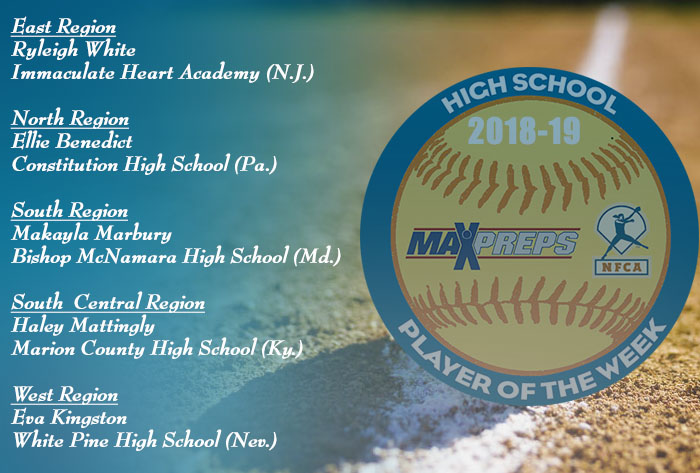 East Region
White tossed 17 innings of hitless and shutout ball, striking out 42 and walking just two batters. She also was 7-for-12 at the plate with a home run and six RBI. White twirled no-hitters against Clifton and DePaul Catholic, striking out 20 and 12 respectively. She issued one walk in each of those contests, facing just one batter over the minimum. The junior hurler fanned 10 in a five innings of work versus Livingston, adding a home run and four RBI in the 5-0 victory.

North Region
Benedict slugged an eye-popping 3.375 by homering six times in her eight at bats, leading the Generals to a pair of big wins last week. She recorded eight hits in as many at bats, registered 17 RBI and scored seven times. The sophomore clubbed four of those long balls with a double, ten RBI and five runs scored versus Parkway West. She added two more homers, including a grand slam, seven RBI against Thomas A. Edison.

South Region
Marbury, was 8-for-8 with three doubles, a triple, two home runs, seven RBI and eight runs scored. She drew five walks, reaching base safely in all 13 plate appearances, and slugged 2.375. Against Our Lady of Good Counsel, Benedict went 4-for-4 with a pair of doubles, a homer, three RBI and three runs scored. She posted three more RBI with a double and triple in game one against The Academy of the Holy Cross. Marbury added another long ball in game two versus the Tartans and scored three times despite not having an official at bat against Bishop O’Connell.

South Central Region
Mattingly posted three wins last week, including a perfect game, and striking out 36. Here perfecto came against Danville, fanning 14 and retiring all 21 batters she faced. Mattingly twirled a two-hit shutout with 13 strikeouts in a 6-0 triumph over Adair County. The junior also made an impact offensively, hitting .600 (6-for-10) with a double, home run and six RBI. Mattingly drove in two runs in each of the Knights’ three games, homering against Taylor County.

West
Kingston was a perfect 10-for-10, with three home runs, nine RBI and 11 runs scored in a three-game sweep of Battle Mountain. The sophomore outfielder, who homered in all three games, added four doubles and slugged 2.300. Her game two and three performances mirrored each other as Kingston went 4-for-4 with two doubles, a home run, three RBI and four runs scored. She added three more RBI and crossed the dish three times in game one.