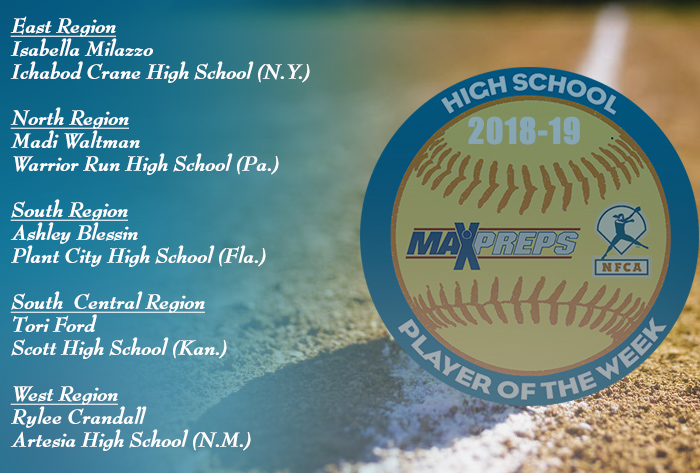 East Region
Milazo twirled a perfect game and finished the week 2-0 with a 0.00 ERA and 30 strikeouts. She struck out a season-best 17 in the perfecto, a 4-0 win over Maple Hill. Earlier in the week, Milazo went the distance in a 9-1 versus Schalmont. She allowed an unearned run on two hits with a 13 punchouts and two walks. For the week, Milazo her opponents to a .087 batting average.

North Region
Waltman twirled a pair of shutouts, including a no-hitter for the Defenders last week. The junior hurler no hit South Williamsport, striking out 13. She followed that outing with 18 punchouts in a nine-inning complete-game three-hit shutout of Milton. For the week, she struck out 31 and held her opponents to an .059 batting average.

South Region
Blessin keyed Plant City to a pair of close victories over Bloomingdale and East Bay with back-to-back one-hit shutouts. The senior righty fanned 16 and walked one in the 3-0 win against the Bulls. Blessin followed with 19 strikeouts, her third highest total of the season, in a 1-0 victory over the Indians.

South Central Region
In a doubleheader sweep of Southwestern Heights, Ford was 6-for-8 (.750) with 11 RBI and four runs scored. She slugged 1.750 with three doubles, a triple and home run. Ford, who recorded three hits in each contest, drove in seven runs with two doubles, three runs scored and a homer in game two. She added a double, triple and four RBI in the opener.

West
Crandall went 4-0 with a 0.00 ERA and 39 strikeouts to just one walk in 19 innings of work. She surrendered an unearned run on seven hits, holding her opposition to a .108 batting average. Crandall tossed a one-hit shutout with eight strikeouts and one walk in an 11-0 win over Portales. The freshman hurler also fanned a season-high 16 in a complete-game win over Goddard. She retired all nine batters in a three-inning win in game one versus Goddard. At the plate, she homered three times and drove in eight runs, including a five-RBI effort in a game-two triumph over Portales.