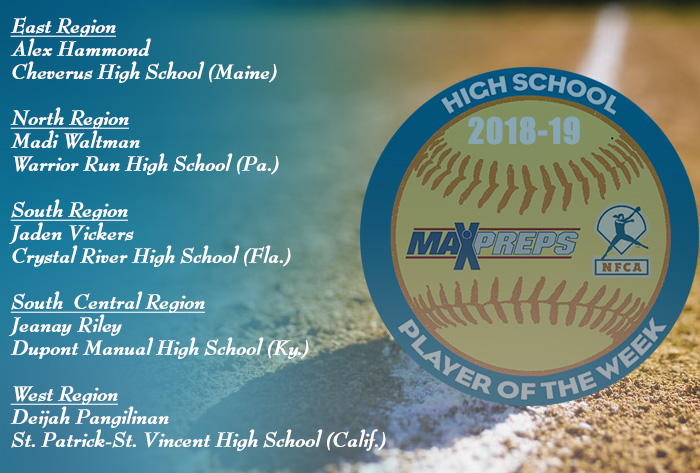 East Region
Five of Hammond’s six hits went for extra bases, including three home runs. She slugged 2.125, drove in eight runs and scored five times in wins over Kennebunk and Gorham. Hammond was 3-for-4 with a double and four RBI in each contest. She left the yard twice versus Gorham and one against Kennebunk.

North Region
Waltman was a workhorse in the circle, going 4-0 with four shutouts, striking out 54 batters and scattering seven hits over 24 innings. She struck out 13 in a five-inning no-hitter against Towanda. Waltman punched out 18 in a two-hit shutout of Lewisburg. She fanned 14 and nine batters against Mifflinburg and Midd-West, respectively.

South Region
Vickers was 2-0 with a 0.00 ERA and 33 strikeouts in 17 innings of work last week. She went all 10 innings with 19 punchouts and two walks in a 2-1 win over Belleview. She also drove in a run against the Rattlers. Vickers, a senior, twirled a one-hit shutout with 14 strikeouts in a 2-0 triumph over Robinson. She added two hits and a double versus the Knights.

South Central Region
Over a four-game stretch, Riley keyed Manual to a 3-1 week in which she hit .667 (8-for-12) with a double, three triples, three homers, 10 RBI and a 2.000 slugging percentage. The junior recorded three multi-hit games, including a 3-for-4 outing with a double, triple, two RBI versus South Oldham. Riley tripled, homered and drove in five runs versus Thomas Nelson. She also recorded a triple and long ball against Silver Creek and homered against nationally-ranked No. 3 Male High School.

West
Pangilinan hit .875 (7-for8) with five home runs and a 2.750 slugging percentage. She scored nine runs and recorded a .889 on-base percentage. Three of her long balls came in a win over Salesian College Prep in which she was 4-for-5 with five RRBI and five runs scored. In Pangilinan’s first game of the week, the she was a perfect 3-for-3 against El Molino with two dingers, six RBI and three runs.