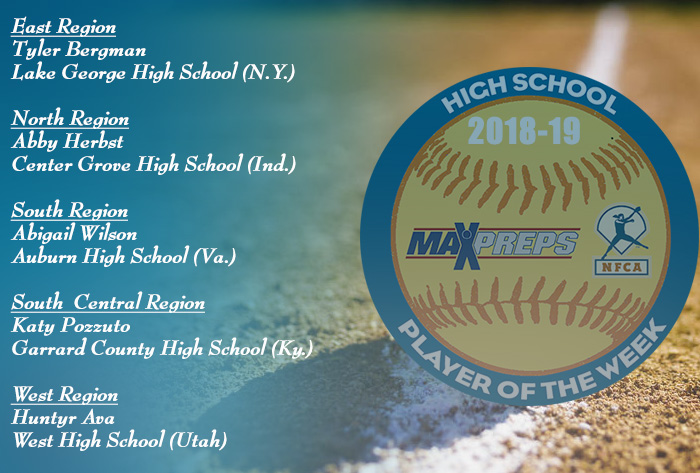 Bergman keyed Lake George to a pair of postseason wins last week. She was 3-for-4 with a home runs, four RBI and three runs scored against Hoosick Falls in the Class C quarterfinal of the Section II Softball Tournament. In a semifinal victory over Greenwich, Bergman recorded three more hits with another long ball, three RBI and a runs scored. For the week, she hit .750 with two homers, seven RBI and four runs scored.

North Region
Herbst was 3-0 with a 0.00 ERA and tossed a no-hitter for Center Grove last week. She faced one batter over the minimum as Herbst held Columbus North hitless in a 7-0 victory. She also was 2-for-4 with a double and RBI against the Bulldogs. Herbst also a two-hit shutout against Cathedral, fanning eight and walking two. She capped off the week with her third win of the week in 6.1 innings of work (3 K, 1 BB) versus Brownsburg. Additionally, the senior homered, doubled and drove in four runs against the Bulldogs.

South Region
Wilson hit .750 with two doubles, two triples, a home run, eight RBI and seven runs scored in three wins last week. She slugged 1.875, drew a pair of walks, which contributed her .800 on-base percentage and swiped four bases. Wilson, doubled, tripled, drove in five runs and scored three times in a win over Bath County. She was 3-for-3 with a double, triple, homer, three RBI and four runs scored against Rural Retreat. She left the yard once more and added two RBI in 3-1 triumph over McCluer.

South Central Region
Pozzuto connected on four home runs, droved in eight runs and slugged 2.571 for the Golden Lions last week. The junior  sent two over the fence with four RBI and two runs scored in a 6-5 win over Pulaski County. Pozzuto was 2-for-2 with a double, home run and three RBI during a victory against West Jessamine. Her final long ball came versus Boyle County.

West
Ava recorded a hit in all six games last week, including four multiple-hit contests. She batted .526 (10-for-19) with four home runs, 12 RBI, nine runs scored and a 1.157 slugging percentage. Ava also was walked five times and registered a .625 on-base percentage. The senior had a monstrous doubleheader against Bountiful, homering in each win with five RBI in game one and three more in the nightcap. Ava also homered and drove in three against East and hit her other long ball of the week versus Roy. Defensively, she was perfect in 25 chances.