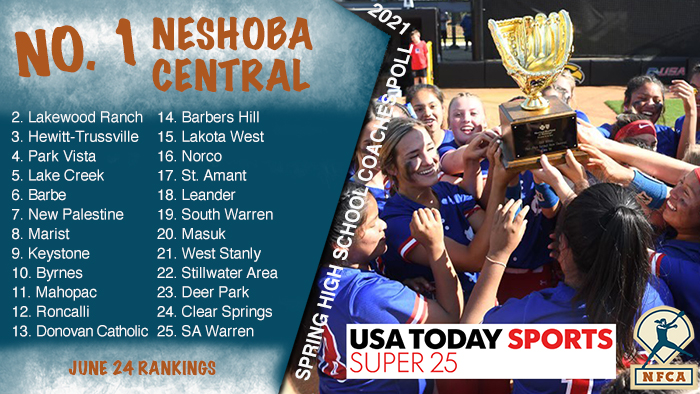 The (32-0) Rockets capped the run to their latest state crown with the second of two victories over East Central in the best-of-three championship series, 14-2, on May 14. Neshoba won the opener, 7-3, the previous day. They will start next season having won 39 consecutive games.

There was no movement this final week with only two ranked teams still playing. Both No. 8 Marist and 13th-ranked Donovan Catholic captured state titles.

Abby Dunning struck out eight and tossed a three-hitter despite her right arm cramping up due to dehydration in 90-degree heat, as Marist (38-1) beat Lincoln-Way Central, 3-1, in last Thursday’s Illinois state Class 4A final. Isabel Cunnea, Eileen Donahue and Sierra Sass drove in runs for the Redhawks, who had beaten Huntley, 1-0, in Thursday’s semifinal round.

Meanwhile, Adriana Romano hit a three-run homer with two outs and two strikes in the bottom of the seventh last Friday, as Donovan Catholic (29-1) forced extra innings before finally winning the New Jersey Non-Public A championship, 8-7 in 10 innings, over Immaculate Heart Academy. Emily Kurth’s sacrifice fly scored Alyssa Apruzzi with the winning run in the final inning to give the Griffins a second-straight state crown.

Donovan Catholic also claimed its second-straight New Jersey Tournament of Champions over the weekend with triumphs over Clayton and Livingston. Romano fanned 12 over 5.1 innings before Julia Apostolakos pitched out of a two-on, one-out jam in the sixth and retired the side in the seventh in a 3-2 semifinal win over Clayton. The Griffins then rolled past Livingston in Sunday’s final, 18-5, on the strength of a 17-run bottom of the third.

State rankings submitted by NFCA member coaches are used to compile the USA TODAY Sports/NFCA High School Super 25. Teams are chosen based on performance, roster quality and strength of schedule. In 2021, schools that didn’t compete were not eligible for the poll.

Programs that did not participate during the 2021 season were not eligible for the poll.