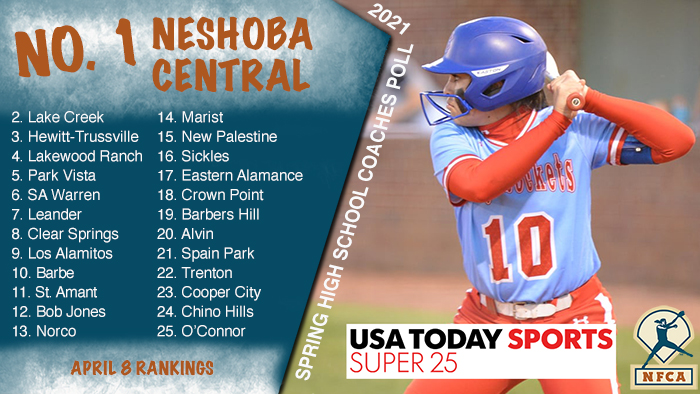 The (5-0) Rockets rolled past Enterprise, 14-2, last Thursday and play Morton on Friday. Neshoba has won the past seven Mississippi 5A state championships, and is riding a 22-game win streak dating back to April 26, 2019, when it lost 5-2 to Grenada in the opener of a best-of-three playoff series it won. Last year, the Rockets were 11-0 before COVID-19 intervened.

Unbeaten Lake Creek (26-0) also leapfrogged Lakewood Ranch and Hewitt-Trussville to take over the No. 2 spot this week. The Lions defeated New Caney, 5-1, last Thursday and Dayton, 9-0, on Tuesday. They have now won 30 straight games, having claimed their last four during last year’s pandemic-shortened 15-1 campaign.

Hewitt-Trussville (31-2-1) went 7-0 over the weekend at the Oxford Spring Sting Tournament, but slipped from second to third following Wednesday’s 8-6 loss to No. 21 Spain Park, while Lakewood Ranch (16-2) won twice, but dropped from first to fourth after a 3-2 loss to Venice on Tuesday. The rest of the top 10 stayed unchanged.

Elsewhere, Barbe (23-2) stayed put at No. 10 after a loss to a quality Sam Houston squad, No. 12 Bob Jones (23-3) rolled through the 28th edition of its own home tournament, and Barbers Hill (24-2) moved up to 19th after getting a perfect game from Reagan Duty in Tuesday’s 18-0 run-rule victory over Port Arthur Memorial.