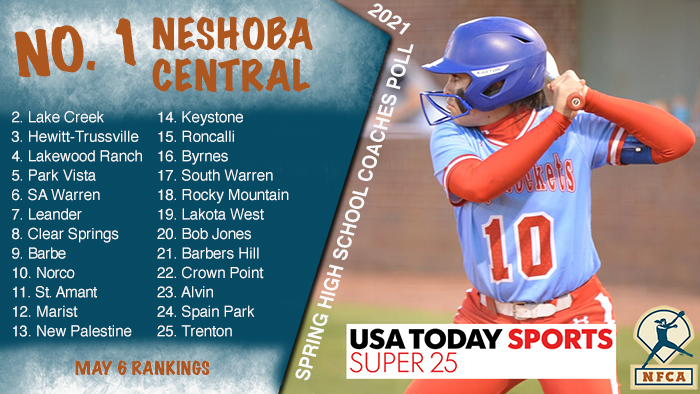 The (27-0) Rockets defeated Grenada twice to run their win streak to 44 games and reach the fourth round of the playoffs. Neshoba will play the winner of a weather-delayed best-of-three series between New Hope and Saltillo this weekend. Saltillo won the first game, 13-4, and can advance with another win later today. The state finals are slated for next weekend at Mississippi State University.

Meanwhile, No. 2 Lake Creek (34-0) overwhelmed Magnolia 39-0 in a pair of Texas playoff contests — the first postseason victories for the Lions in school history. Senior Emiley Kennedy fanned 12 in the first game, while sophomore Ava Brown tossed a perfect game in the second, striking out 20 of the 21 batters she faced.

Fifth-ranked Park Vista (25-0), which has won 44 straight games, finally heads back to action today with a Florida playoff matchup against Jupiter, the last team to beat the Cobras back on April 25, 2019.

Elsewhere, New Palestine (19-0) moved up one more place this week after dealing No. 15 Roncalli (15-1) its first loss, 4-0, last Saturday in a showdown of top Indiana programs.