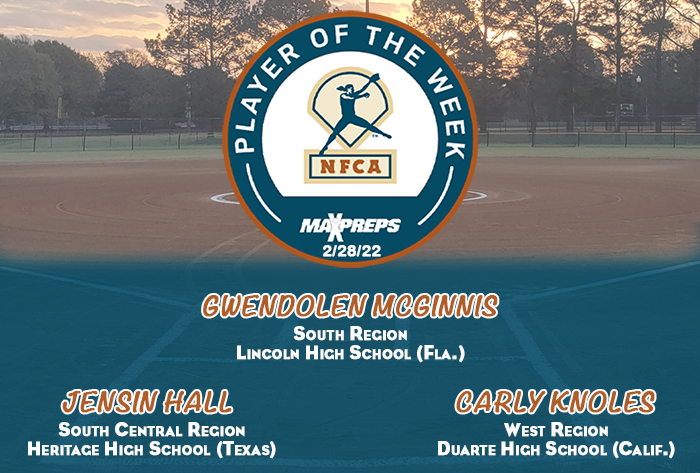 McGinnis was nearly perfect in the circle for the Trojans last week. The senior hurler twirled a pair of no-hitters, including a perfect game against Madison County. She fanned 20 of 21 batters in the 3-0 victory over the Cowboys. In her first start of the season, McGinnis struck out 15, and walked two as she faced just two batters over the minimum in a 2-0 triumph against Wakulla. In the two starts, she struck out 35 and faced just 43 batters in a pair of closely-contested games.

Hall was 2-0 with a 0.00 ERA, two shutouts, 28 and strikeouts and five walks. She surrendered just one run and held her opponents to a .028 batting average over 10 innings of work. Hall also pitched in offensively, going 4-for-5 with two homers and four RBI. In a four-inning no-hitter against Independence, Hall struck out 11 of 15 batters she faced. The junior hurler fanned 17 of 21 batters, and walked two in a one-hit six-inning shutout of Centennial. She homered and drove in two in each contest.

Knoles paced Duarte at the plate in five wins last week, hitting .867 (13-for-15) with a double, six triples, a home run and 13 RBI. She scored eight times, slugged 1.933 and reached base at a .889 clip. Knoles tripled in every contest, including two against Lutheran in which she was 4-for-4 with four runs scored. The senior captain drove in five runs against Gabrielino, and added three RBI against Firebaugh and Fairfax, homering in the 7-6 victory over the latter Lions.

every Monday during the spring campaign with a player from each of MaxPreps’ five high school regions being selected.