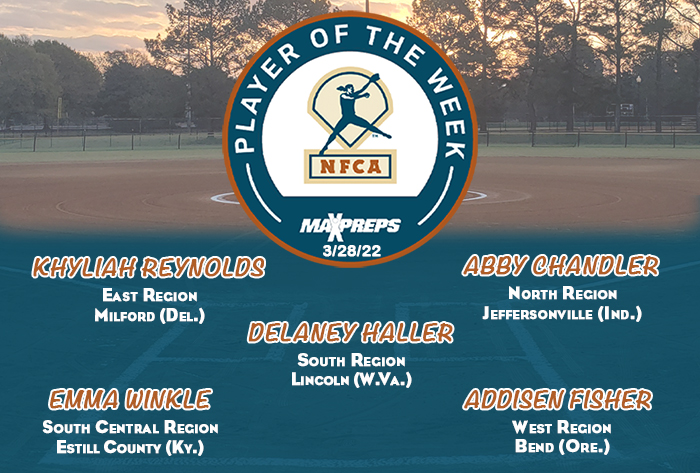 Reynolds tossed a five-inning no-hitter in the Buccaneers’ season opener against Newark. She struck out 11, hit one batter and did not issue a free pass as Reynolds faced one batter over the minimum. At the plate, Reynolds recorded a hit, drew three walks and scored three runs.

Chandler hit .833 with a triple, three home runs, eight RBI and four runs scored in the Red Devils’ first two games of the season. The senior slugged 2.667 and recorded a 3.381 OPS. Chandler clubbed three long balls, drove in five runs and scored three times against Mercy. In the season opener against Grayson County, she finished 2-for-3 with a triple, three RBI and a run scored.

Haller lifted the Cougars to three victories as their season got underway last week. She was a perfect 9-for-9 and reached base safely in all 12 plate appearances. Haller registered four doubles, eight RBI and six runs scored, a 1.444 slugging percentage and a 2.444 OPS. In the circle, the junior earned three wins, allowing just two hits, striking out 27 and not issuing a walk. Haller tossed a five-inning perfect game against Elkins with 10 strikeouts and also fanned 10 over four innings versus South Harrison.

Winkle went 2-0 with a 0.35 ERA and 33 strikeouts over 20 innings of work. She fanned 14 in back-to-back complete-game wins over Breathitt County and Pulaski County. Following a four-hitter against Breathitt, Winkle twirled a two-hitter in a 10-inning victory versus the Maroons. In the 9-1 triumph, Winkle doubled and drove in five runs. In her other outing, she tossed three innings of shutout relief with five strikeouts against North Laurel.

Fisher posted a 3-0 record with a 0.00 ERA and 44 strikeouts in 21 innings of work. At the plate, she hit .588 (10-for-17), homered six times and scored 10 runs. Fisher was perfect in a 1-0 victory over Mountain View, striking out 16 of the 21 batters she faced, while also providing the only run of the game with a fourth-inning long ball. She also fanned 15 in a two-hit shutout of Eagle and added 13 more punchouts in a four-hit complete game win versus Canby.  The sophomore left the yard twice against Canby and Eagle and finished the week slugging 1.765.