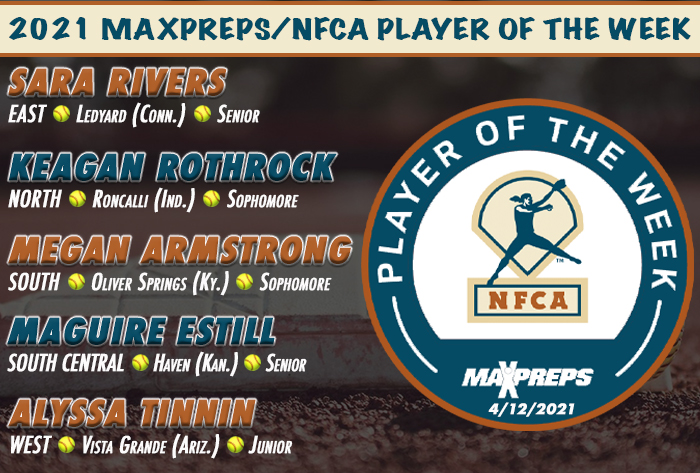 Rivers was a walk away from a perfect game in her first start of 2021. The senior hurler struck out 16 and walked one in a victory over New London. She also was 3-for-5 at the plate with two runs scored and added one stolen base.

Rothrock was dominant in the circle for the Rebels. She was 3-0 with a 0.00 ERA and 59 strikeouts over 23 innings of work. She surrendered just four hits and did not issue a walk. Rothrock twirled a six-inning no-hitter, fanning all 18 batters she faced in a 11-0 win over Hamilton Southeastern. The sophomore hurler also tossed a three-hit shutout with 15 punchouts versus Center Grove. She punched out 15 and 11 batters in two other appearances last week. At the plate, Rothrock was 6-for-13 with two doubles, two home runs and five RBI.

Armstrong was perfect at the plate in a pair of wins over Harriman and Midway. She reached base in all eight plate appearances, launching three home runs, recording 10 RBI and scoring seven times. Against Harriman, Armstrong left the yard twice with five RBI and four runs scored. In her second outing, the sophomore posted a 3-for-3 effort at the plate with a double, homer, five RBI and three runs scored.

Over a four-game stretch, Estill went 11-for-13 (.846) at the plate with three doubles, a triple, two home runs, 12 RBI and 13 runs scored. She did not strikeout in 16 plate appearances, slugged 1.692 and reached base at a .875 clip. Estill was a single short of the cycle as she went 3-for-3 with five RBI and four runs scored in game one of a doubleheader versus Larned. She went a perfect 4-for-4 with a double and four RBI in game one versus Halstead and followed that with a 3-for-4 showing with a long ball and four runs scored in game two.

Tinnin twirled three shutouts, including a perfect game, while also going 5-for-7 at the plate with three doubles and eight RBI in three wins for the Spartans. She struck out 11 in her five-inning perfecto versus St. Mary’s. She also tossed a one-hit shutout with nine punchouts and zero walks versus Apache Junction. For the week, Tinnin was 3-0 with a 0.00 ERA and 28 strikeouts to just one walk in 17 innings. She added two doubles and four RBI versus Apache Junction, while registering two RBI apiece against Combs and St. Mary’s.