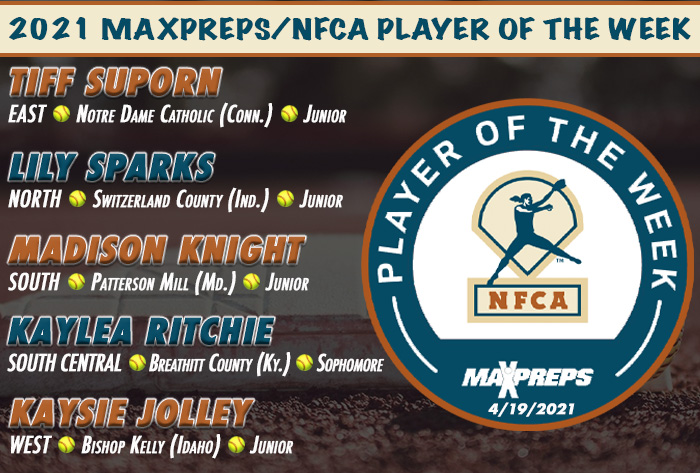 Suporn hit .750 (6-for-8) with two triples and home runs, 10 RBI and six runs scored. She drew five walks, posted a .923 on-base percentage and slugged 1.750. She recorded four RBI in wins over Stratford and Newtown. Suporn tallied three hits, two RBI and three runs scored versus Weston. Her first home run of the season came in an 8-7 triumph over Newtown.

Sparks picked up three wins last week, recorded two no-hitters and struck out 40 in 19 innings of work. She fanned a season-high 19 in a no-hitter versus Milan. She added 11 more punchouts in a five-inning perfect game against Shawe Memorial. In a 2-0 defeat of South Ripley, Sparks held the Raiders to four hits and struck out 10 in the complete-game shutout. Offensively, the junior went 5-for-5 with a double, five RBI and four runs scored against Shawe Memorial.

Knight twirled a pair of shutouts, including a five-inning perfect game versus C. Milton Wright. The junior hurler fanned 11 of 15 batters she faced against the Mustangs. Knight tossed a two-hit shutout with 13 punchouts against Fallston. At the plate, she was 7-for-9 with three doubles a home run and seven RBI. Knight went 4-for-4 with a double, long ball and four RBI versus Fallston. She drove in three more runs and doubled twice against Perryville.

Ritchie was a perfect 11-for-11 with a pair of doubles, one triple and one long ball last week. She recorded nine runs and eight RBI, while slugging 1.636. Ritchie posted two four-hit contests in wins over Cordia and Buckhorn. In the latter matchup, she doubled, homered, drove in three and scored four runs. The sophomore tallied three runs versus Cordia and was a home run shy of the cycle with four RBI and two runs versus Morgan County.

Jolley hit .923 (12-for-13) with three doubles, a triple, three home runs, 11 RBI and 11 runs scored. She slugged 2.000 and posted a .929 on-base percentage over four games last week. Jolley registered a pair of 4-for-4 outings against Jerome and Caldwell. Against Jerome, she was a double shy of the cycle, homering twice, driving in four runs and scoring four times. The junior added four runs scored against Caldwell and doubled two times versus Middleton.