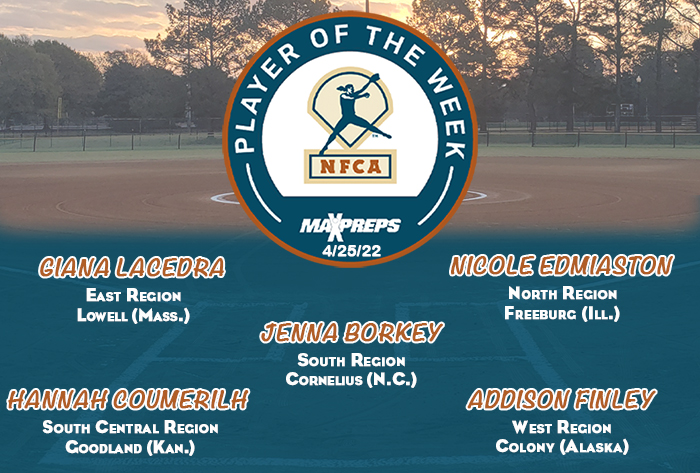 Lacedra finished 2-0 with a 0.00 ERA, tossing two shutouts and striking out 34. She fanned 20 and walked one in a three-hit shutout of Chelmsford. Lacedra followed with a one-hit blanking of Wndham, punching out 14 and not issuing a free pass. The senior added a double, triple and three RBI versus Chelmsford and scored a run against Windham.

Edmiaston was perfect at the plate (10-for-10), clubbed six homers, drove in 16 runs and registered an eye-popping 3.000 slugging percentage over three games last week. She also scored 10 runs, doubled twice and walked once.  Edmiaston, who left the yard twice in each contest, recorded six RBI against Roxana. The junior added a pair of five RBI outings versus Breese Central and Centralia.

Borkey played a pivotal role in Hough’s 4-0 week. The senior hit .875 (7-for-8) with a double, two triples and two home runs. Borkey registered nine RBI and 10 runs, slugged 2.250, drew four walks and reached base at a .917 clip. Both her round trippers came in a 3-for-3, four-RBI outing against Chambers. Borkey doubled and drove in three runs versus West Charlotte High School, while scoring three times and posting two RBI versus North Mecklenburg High School.

Coumerilh hit .833 (15-for-18) with three doubles, two triples, 16 RBI and nine runs scored. She went 4-for-5 with both triples, a double, and seven RBI in game two versus Ulysses High School. Coumerilh was a perfect 6-for-6 and knocked in six runs in the second contest versus Lakin High School. The sophomore shortstop scored three times in each of those matchups.