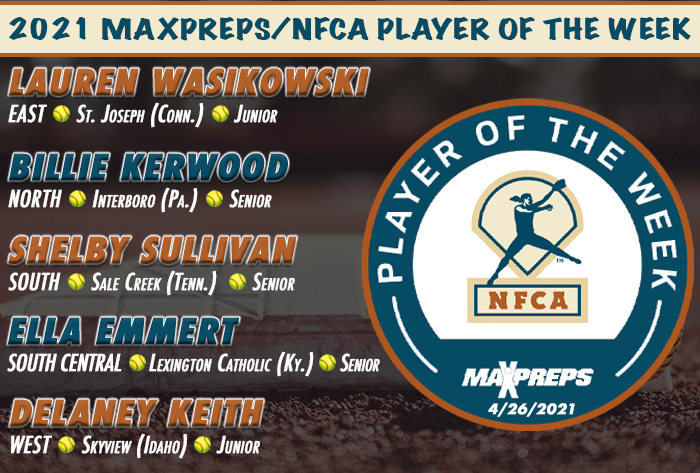 Wasikowski allowed an unearned run and three hits, while striking out 35 in 12 innings of work last week. At the plate, she hit .500 (6-for-12) with a pair of doubles, three RBI and six runs scored. The junior recorded all the outs with a 21-strikeout performance in a victory over New Canaan. She surrendered an unearned run, two hits and a walk against the Rams. In a one-hit shutout of Darien, Wasikowski fanned 14 and did not issue a free pass. She went 4-for-6 with a double, RBI and two runs scored in the opening win over New Canaan, while scoring twice versus Westhill and Darien.

Kerwood keyed Interboro to a pair of wins by tossing consecutive no-hitters against Garnet Valley and Monsignor Bonner/Archbishop Prendergast Catholic. In the opener, the senior right-handed hurler fanned 17 and walked one in a 2-0 victory. Kerwood followed that up with a 14-strikeout outing with four free passes in a 5-0 triumph.

Sullivan posted a perfect week at the plate, finishing 7-for-7 with four long balls, 10 RBI and a 2.714 slugging percentage. She homered twice in wins over Copper Basin and Meigs County, scoring three times in each contest, while driving in four and five runs, respectively. Sullivan finished the week going 2-for-2 with an RBI and run scored against Lookout Valley.

Keith was perfect 11-for-11 with two doubles seven home runs and 25 RBI over three games last week. She also scored 11 runs and slugged a whopping 3.090. Keith clubbed three of those longballs and drove in nine runs in a victory over Meridian. The junior infielder posted two doubles, two homers and 10 RBI versus Mountain View and added two more round trippers and six RBI against Centennial.