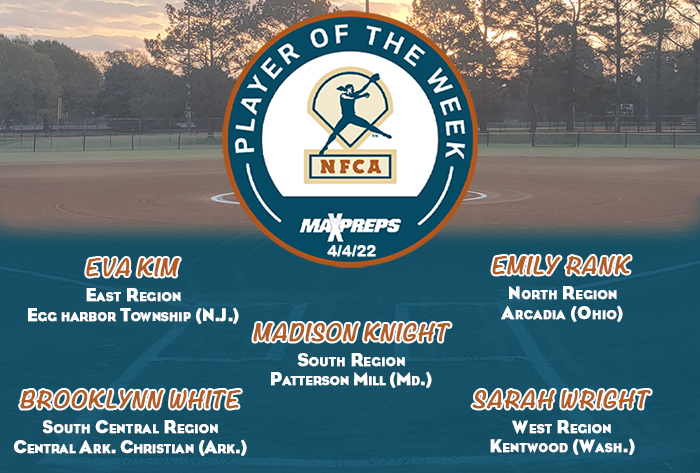 Kim opened her 2022 campaign, hitting .667 (4-for-6) with a triple, two home runs, seven RBI and three runs scored. She drew a pair of walks, recorded a .714 on-base percentage and slugged 2.000. In the season opener against King’s Christian, she left the yard twice, drove in five runs and scored three times. Kim also added a triple and two RBI versus Our Lady of Mercy Academy.

Rank hit .818 (9-for-11) and reached base in 14 of her 16 plate appearances as her team opened their season 3-1. The junior recorded seven extra-base hits (3 2B, 3B, 3 HR), which contributed to her 2.090 slugging percentage, drove in 11 runs and scored 10 times. Rank began her season with two round trippers, four RBI and three runs scored in a 9-4 win over Ada. She also doubled, homered, and finished with three RBI and four runs scored versus Danbury. Rank drove in all three of her team’s runs against New Riegel.

Knight twirled a pair of complete game shutouts, including a 21-strikeout performance against North East, and finished fanning 35, while allowing just three hits and walking two. She helped herself out at the plate by homering, doubling twice and knocking in five runs. Against North East, Knight faced just two batters over the minimum. She surrendered one hit and walked one in a 9-0 victory. The junior started her week the with a two-hitter (14 K, 1 BB) and was responsible for two of those runs, going 2-for-3 with a double, long ball and two RBI.

White clubbed six long balls and knocked in 18 runs, including nine in one contest, en route to monstrous week at the plate. The junior hit .833 (10-for-12), added three doubles, walked four times and scored 11 runs. White slugged 2.583 and recorded a 3.458 OPS. She opened the week with the nine-RBI performance against Dollarway in which White launched three homers, doubled and scored five times. She added a second three-home run game versus Batesville, recording four hits, a double, six RBI and four runs.

Wright finished 2-0 on the week with a 0.00 ERA and 34 strikeouts to just one walk in 12 innings. The sophomore hurler tossed a five-inning perfect perfect game against Tahoma, striking out all 15 Bears she faced. She added a 19-strikeout performance in a complete game victory over Kennedy Catholic. She surrendered an unearned run on a one hit and issued one free pass. At the plate, Wright was 5-for-8 with a double and three runs scored.