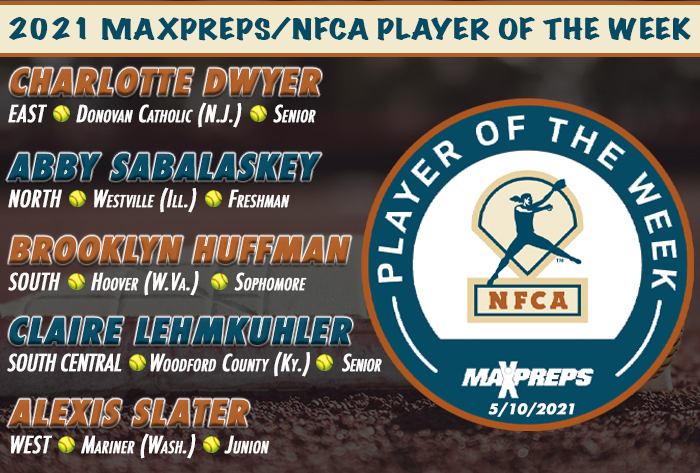 Dwyer was a perfect 9-for-9 with three long balls, nine RBI and five runs scored. She went 3-for-3 and homered in each of Donovan Catholic’s three victories. Dwyer drove in four runs in the first meeting against Liberty. She added two RBI and three runs scored in the second matchup against the Lions. The senior closed out the week with three more RBI against Barnegat.

Sabalaskey did not allow a hit, struck out 56 and walked two batters in 22 innings. The freshman southpaw tossed two seven-inning no-hitters, one in five innings and one in three. Sabalaskey added a double, home run and seven RBI in a doubleheader sweep of Iroquois West. In that sweep, she fanned 22 and did not issue a free pass over eight perfect innings. Sabalaskey started the week with 16-strikeout no-no with two walks in a 2-0 victory over Salt Fork. She followed that with an 18-strikeout perfect game against Oakwood.

Huffman hit .778 (7-for-9) with four home runs, 12 RBI and a 2.222 slugging percentage. She scored six times and posted an .800 on-base percentage. Huffman went 3-for-3, roping a double and two long balls with six RBI in game two versus Clay County. In game one of the twinbill, she homered, drove in four runs and scored twice. Huffman also left the yard and recorded two RBI versus Poca.

Lehmkuhler went 4-0 with a 0.00 ERA with 48 strikeouts and two walks over 23 innings of work. She scattered seven hits and allowed an unearned run, while also hitting a pair of home runs and driving in six runs last week. Lehmkuhler tossed a two-hit shutout with a week-best 15 strikeouts and no walks during a 2-0 victory over Madison Southern. The senior hurler fanned 13 in wins over Henry Clay and Estill County. At the plate, Lehmkuhler left the yard against Henry Clay and Spencer County and added a 3-for-4 outing with a double and two RBI versus Estill County.

Slater was dominant in three close victories last week, tossing a no-hitter, along with two-hit and three-hit shutouts. The junior hurler struck out 43, walked three and scatter five hits over 21 innings. Slater no-hit Mountlake Terrance with 15 punchouts and two walks in a 3-0 win. She fanned 14 Edmonds-Woodway batters and issued one walk in another 3-0 triumph. Slater capped off her stellar week with another 14-strikeout performance, not walking a batter during a 2-0 win versus Lynnwood.