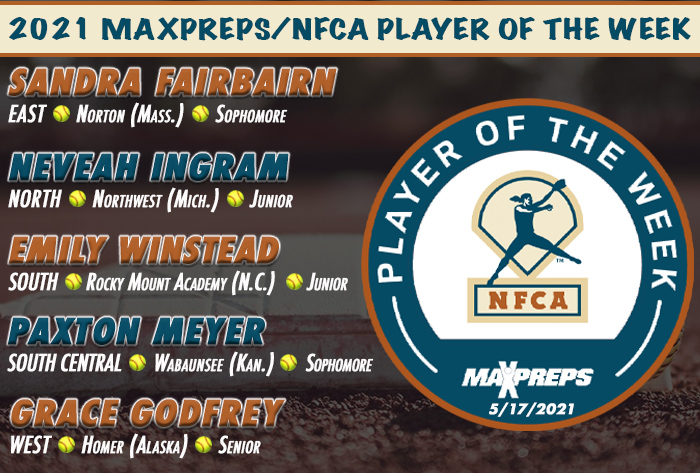 Fairbairn powered Norton to three wins last week. The sophomore infielder hit .800 (8-for-10) with three doubles, a triple, three home runs and nine RBI. Fairbairn scored seven times, posted a .818 on-base percentage and slugged 2.200. She homered in each game, recording a cycle in a victory over Millis. In that contests, she went 4-for-5 with two RBI and two runs scored. Fairbairn added two doubles, four RBI and three runs versus Dover-Sherborn and drove in three more runs against Bellingham.

Over three starts, Ingram did not allow a hit and struck out 45 with one of her three no-hitters being a perfect game against Leslie. She capped off the week with that perfecto, setting down all 21 Blackhawks with 13 punchouts. In her first start of the week, Ingram fanned a season-best 17 with one walk in six innings against Coldwater. The junior hurler came back in game two against the Cardinals, striking out 15 with one free pass.

Winstead tossed 22 shutout innings to post a 3-0 record with three shutouts and 52 strikeouts. The junior hurler scattered seven hits, had 13-plus punchouts in each start and issued four walks, while holding her opposition to a .099 batting average. Against Harrells Christian Academy, Winstead was masterful in a one-hit shutout in which she struck out 20, walked one and faced just one batter over the minimum. She went on to post four- and two-hit shutouts in consecutive 2-0 wins over Wayne Christian, striking out 16 and 13, respectively.

In a doubleheader sweep of Osage City, Meyer went a perfect 7-for-7 with seven RBI, four runs scored, three doubles and three triples. The sophomore went 3-for-3 in the opener with a double, triple, three RBI and two runs scored. Meyer continued her output in game two, doubling and tripling twice, driving in four runs and scoring two more times.

Godfrey posted an .889 (8-for-9) batting average with three doubles, two triples, two home runs, 10 RBI and 13 runs scored. She drew four walks, slugged 2.333 and registered a .929 on-base percentage. Godfrey, a senior outfielder, homered, scored five times and recorded three RBI in wins over Kenai Central and Houston (game two). She was a single short of a cycle in the latter victory and also came within a homer of the cycle in game one versus Houston (3-for-3, 4 RBI).