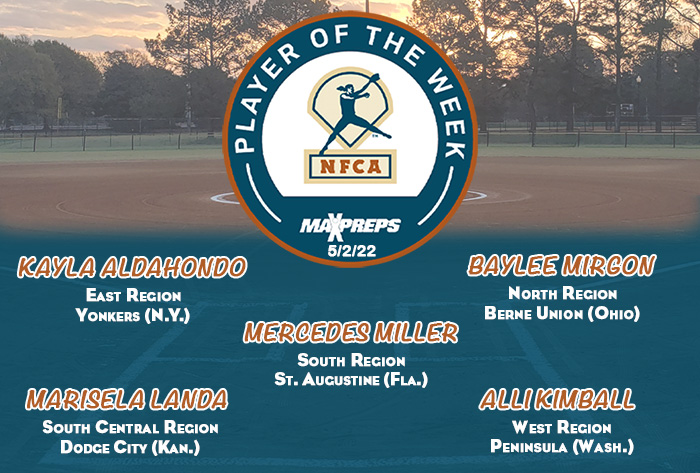 Aldahondo, hit .750 (9-for-12) with three doubles, two homers and 15 RBI. She scored nine runs, walked four times, posted a .812 on-base percentage and slugged 1.500. Against Riverside, she drove in five runs in a 4-for-4 outing with a double, home run and three runs scored.  Aldahondo also recorded five RBI with two doubles versus Lincoln. In a win over Gorton, the sophomore registered a double, long ball, four RBI and four runs. In the circle, she struck out nine and allowed an unearned run on one hit in four innings of work versus Gorton.

Mirgon drove in 13 runs and scored 12 more leading Berne Union to a 5-0 week. Batting .917, seven of her 11 hits went for doubles, to go along with a home run, which contributed to a .1750 slugging percentage. Mirgon also drew eight walks and recorded a .905 on-base percentage. The junior clubbed a home run and registered a season-best six RBI against Harvest Prep. Mirgon was a perfect 3-for-3, all doubles, with three RBI and two runs scored versus Worthington Christian.

Miller keyed the Yellow Jackets to four wins last week, hitting ..923 (12-for-13) with four doubles, a triple, home run, eight RBI and 11 runs scored. She slugged 1.615 and reached base at a .929 clip. Registering four multi-hit contests, Miller notched a season-high four hits (2 doubles, triple), two RBI and three runs scored against Riverside. The senior posted three hits against Andrew Jackson and scored both runs in a 2-1 victory. Miller also notched three base knocks versus Christ’s Church Academy with a home run and four RBI. She was a perfect 4-for-4 swiping bases.

Landa hit .846 (11-for-13) with five doubles and triple and 16 RBI. She scored five times and slugged 1.384. Landa drove in at least three runs in all four contests with a season-best five (4-for-4 with two doubles) in game one versus Hays. The senior registered four more RBI in a game two win versus the Indians. Landa doubled, tripled, posted four RBI and scored three runs in game two of a doubleheader sweep against Heights.

Kimball was nearly unhittable, which included a perfect game, during her three outings last week. The junior hurler did not surrender a run and allowed just two hits over 15 innings of work. She fanned 31 and did not issue a free pass. Kimball’s perfect game was a five-inning outing with 10 strikeouts against Central Kitsap. She also added a two-hit shutout with 13 more punchouts versus Yelm, while tossing three innings of perfect relief (eight strikeouts) against Capital. Kimball contributed offensively hitting two long balls and driving in five runs versus Capital and added a double and two RBI versus Yelm.