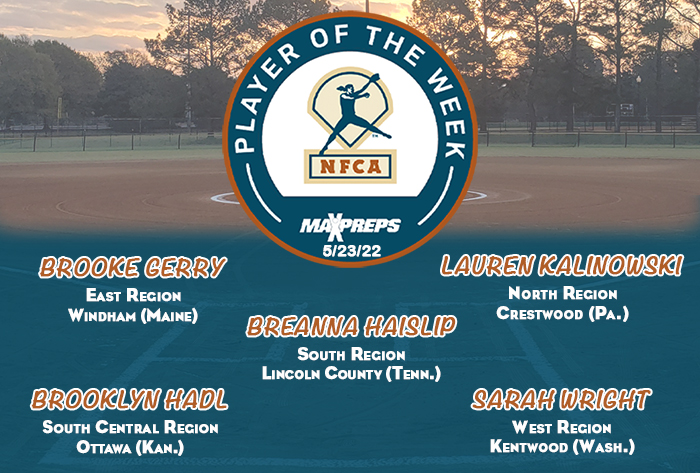 Gerry put forth three dominant performances in the circle last week, posting a 3-0 record with three shutouts, including a perfect game. The southpaw struck out 36, did not issue a walk and surrendered just four hits in 19 innings of work. Against Kennebunk, Gerry retired all 21 batters and struck out nine in a 5-0 victory. She fanned a season-best 16 in a win over Noble and added 11 more punchouts versus Marshwood. At the plate, she hit .700 (7-for-10) with two doubles and four runs scored.

Kalinowski was a perfect 10-for-10 at the plate and reached base safely in all 11 plate appearance last week. She drove in eight runs and scored three. Kalinowski was 5-for-5 against Wilkes-Barre and registered four RBI versus Wyoming Valley West.

Haislip hit .667 (8-for-12) with two doubles, two homers, 10 RBI and nine runs scored. She recorded a season-high five RBI with a double and both her long balls versus Upperman. She doubled and drove in three against White County. Haislip scored three runs in each of  the Falcons’ three victories.

Hadl had a big game against Atchison in which she was 4-for-4 with a double, triple, two home runs, seven RBI and four runs scored. She added another hit, RBI and run scored in a 4-3 victory over Holton.

Earning her second honor of the year, Wright keyed  Kentwood to a pair of close victories last week. She recorded a 16-strikeout (one walk) no-hitter in a 2-0 win over Emerald Ridge. Wright followed that performance by fanning 19 batters and allowing an unearned run in a 2-1 triumph against Olympia. For the week, she surrendered three hits, struck out 35, walked four in 14 innings.