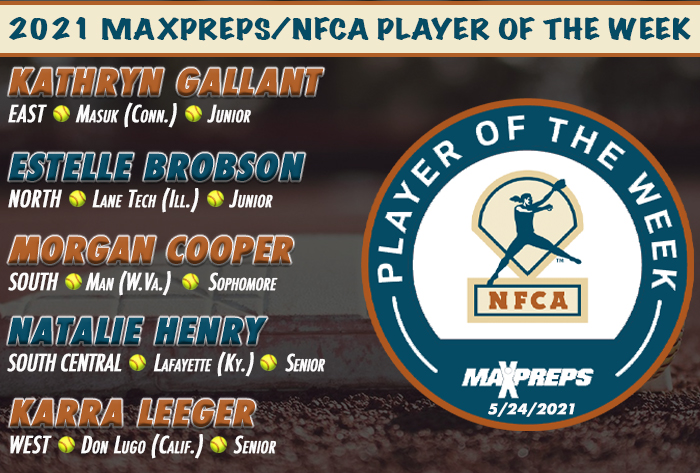 Gallant powered Masuk to three victories last week with her arm and bat. The junior was 3-0 with three shutouts, striking out 45 and allowing just two hits over 20 innings of work. Gallant went 7-for-11 at the plate with three doubles, two home runs, nine RBI and two runs scored. She opened the week with a 19-strikeout (one walk) no-hitter versus Pomperaug in which she also contributed a double and three RBI. Gallant twirled a pair of one-hit shutouts against Joel Barlow (12 K, BB) and Brookfield (14 K, BB). In the latter contest, she clubbed a pair of round trippers and drove in six runs.

Brobson was a perfect 9-for-9 at the plate and reached base safely in all 10 plate appearances. She registered a double, two triples, drove in six and scored six times. Additionally, Brobson was 3-0 in the circle with 1.00 ERA and 26 strikeouts over 14 innings of work. The junior went 4-for-4 with a triple, two RBI and two runs scored versus Brooks. Brobson was a home run short of the cycle against Curie in which she was 3-for-3 with three RBI. She also struck out 10 with a walk and one hit allowed versus Curie. She added eight strikeouts apiece in victories over Brooks and Kennedy.

Cooper posted a 3-0 mark with 0.00 ERA, 41 strikeouts in 16 innings of work. She surrendered two hits and issued two walks, limiting her opponents to a .037 batting average. At the plate, Cooper hit .727 (8-for-11) with a pair of doubles, two long balls, eight RBI and six runs scored. Both of her home runs came in an 8-2 win over Logan to go along with three RBI. She also recorded three RBI against Tolsia. The sophomore hurler fanned 16 and surrendered two unearned runs in a one-hit complete game versus Logan. Cooper punched out 14 and allowed one hit in five innings versus Mingo Central.

Henry keyed the Generals to a 3-1 week, batting .692 (9-for-13) with two doubles, three home runs, 10 RBI and eight runs scored. She slugged 1.538 and drew three walks, contributing to a .750 on-base percentage. Henry was a triple shy of the cycle in a win over Henry Clay. The senior infielder went 4-for-4 in that contest with five RBI and three runs scored. She added a 3-for-4 outing with a home run, driving in three runs and scoring three times.

In a doubleheader sweep of Montclair, Leeger hit .875 (7-for-8) with four home runs and 10 RBI. She also doubled, scored six runs and slugged 2.500. Leeger, a senior, homered twice and drove in five runs in both ends of the doubleheader. In game one, she was a triple short of the cycle and scored four times. Leeger added two more runs in a 3-for-3 game-two outing.