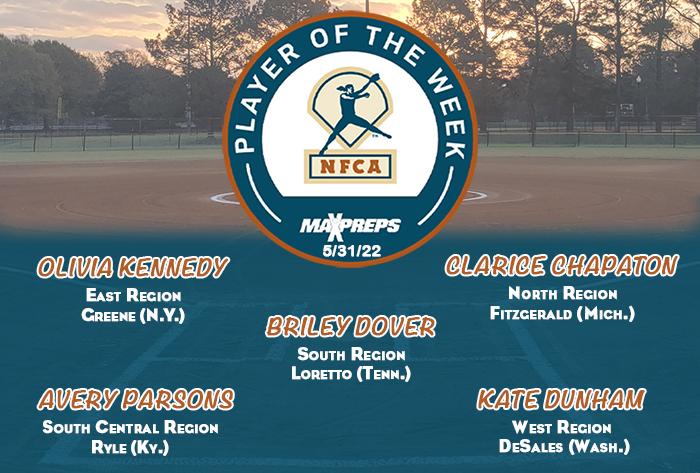 Kennedy played a pivotal role in Greene capturing the Section 4 Class C title. She twirled three complete-game shutout, including a no-hitter in the sectional final versus Elmira Notre Dame. In that contest, Kennedy fanned 14 and walked two to record her fifth no-no of the season. She also ignited a two-run first inning with a triple. She blanked Spencer-Van Etten on one hit and 14 punchouts in the sectional semifinal and allowed two hits and fanned 15 versus Edison. For the week, the senior hurler went 3-0 with a 0.00 ERA and 43 strikeouts in 21 innings.

Chapaton had a big week in leading the Spartans to three triumphs. The junior was nearly perfect at the plate (9-for-10) with three doubles, three long balls, 15 RBI and 10 runs scored. She drew three walks, reached base at a .923 clip and slugged 2.100. Chapaton drove in a season-high seven runs with a double, two long balls and five runs scored against Madison. She added five more RBI, two doubles and two runs versus Lincoln. Chapaton homered for a third time in a second game against Lincoln with three RBI and three runs.

Dover posted a .727 batting average, going 8-for-11 at the plate with two doubles, two homers, three RBI and eight runs scored for the Spartans. She drew five walks, recorded a .812 on-base percentage and slugged 1.454. Dover was a triple short of the cycle against Adamsville, going 4-for-4 with a double, home run, two RBI and three runs scored. She scored twice in a a 3-2 win over Meigs County and went 3-for-3 with a double, long ball and two runs against Forest.

Parsons recorded a pair of four-hit outings and finished the week, 10-for-15 (.667) with three doubles, two round trippers, nine RBI and a 1.266 slugging percentage. Against Conner and Cooper, the junior notched four hits, a double and homer in each victory. She drove in four runs in the first contest and three more in the latter. Parsons added two hits with a double and two RBI against Beechwood.

Dunham powered the Irish to four victories last week. She hit .667 (8-for-12) with three doubles, three triples, 12 RBI and 10 runs scored. Dunham, a sophomore, drew three walks, posted a .750 on-base percentage and slugged 1.416. She was homer short of the cycle against Liberty Christian, going 4-for-4 with a pair of doubles, a triple, three RBI and two runs scored. In a big win over Quilcene, Dunham notched a double, two triples and a season-high six RBI.