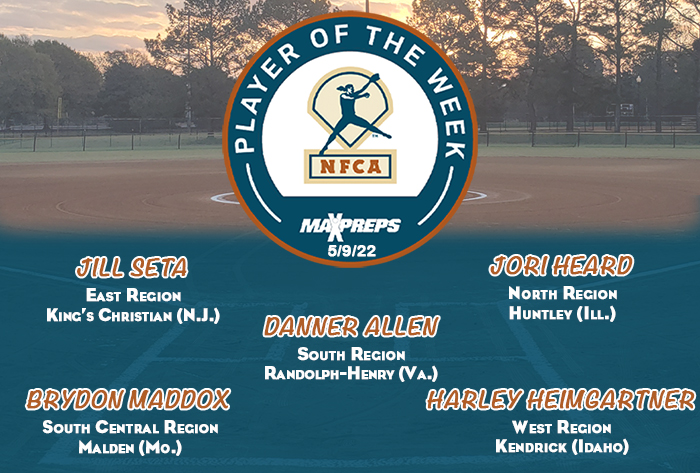 Seta hit .750 (6-for-8) a double, triple, two home runs and 12 RBI. Powering King’s Christian to a pair of wins, the junior captain slugged 1.875 and registered a pair of three-hit contests. Seta left the yard twice and drove in five runs against Cumberland Christian. She posted seven RBI  with a double and triple against The Christian Academy.

Heard posted a 4-0 mark with three shutouts and 58 strikeouts to just four walks over 26 innings of work. Highlighting her week was an eight-inning no-hitter against Kandeland in which she fanned 16 and walked two in a 1-0 win. Heard also struck out 16 in a two-hit shutout of Central. She added 14 and 12-strikeout performances as well. She also went 4-for-5 with three doubles and four RBI in a win over Oswego.

In a pair of complete-game shutouts, Allen allowed just four hits, struck out 37 and did not issue a walk in 14 innings. She blanked Amelia County, holding the Raiders to one hit and matching a season-high with 19 strikeouts. Allen fanned 18 more batters in a three-hit shutout of Buckingham.

Maddox hit .727 with three doubles, a triple, two home runs, 10 RBI and 10 runs scored. She slugged 1.727 and reached base at a .786 clip. In a pair of wins over Charleston, Maddox combined to go 5-for-6 with two doubles, a triple and two long balls. She drove in eight runs and scored seven. Maddox also scored three runs in a one-run win over Risco.

Heimgartner was a perfect 9-for-9 at the dish with three doubles, 11 RBI and 12 runs scored. She scored three times in each of the  Tigers’ four wins and registered four multi-hit and multi-RBI contests. Heimgartner doubled and drove in four runs against Troy. She added two doubles, with three RBI against Nezperce.