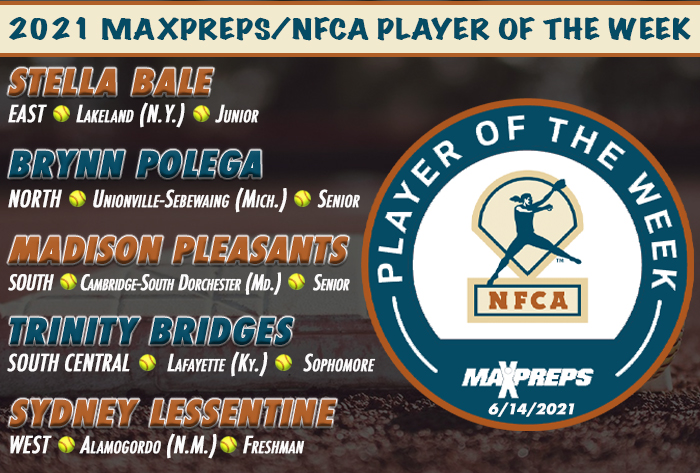 Bale posted a 3-0 mark with a 0.27 ERA and 52 strikeouts to just one walk over 26 innings of work. She twirled a no-hitter and scattered seven hits. Bale no-hit Rye in a 1-0 win, striking out 15, walking none, and facing just one batter over the minimum. The junior hurler tossed a 12-inning shutout in a 1-0 victory over Yorktown in which Bale fanned 20, walked one and allowed three hits. She also struck out 17 and did not walk a batter in a complete-game four-hitter versus Eastchester.

Polega was 3-0 with a 0.37 ERA and 47 strikeouts. She also went 7-for-12 at the plate with two doubles, a home run and six RBI. Polega twirled a two-hit shutout with 15 punchouts and a walk, while homering and driving in three runs versus Beaverton. Polega registered a one hit five-inning shutout against Kingston in which she fanned 11 and issued a free pass. In a 9-1 victory versus Harbor Beach, the senior righty recorded all 21 outs via strikeouts.

Pleasants finished the week 3-0 with a 0.00 ERA, two no-hitters, including a perfect game, and 47 strikeouts. She struck out 14 of 15 batters in a five-inning perfect game versus Pocomoke. Pleasants fanned 16, walked two, and allowed an unearned run against St. Michaels in her second consecutive no-hitter of the week. The senior hurler recorded 17 more strikeouts in a two-hit complete-game effort versus North Dorchester.

Bridges tossed back-to-back two-hit shutouts against Scott County and Lexington Catholic. The junior opened the week with a career-high 15 strikeouts and three walks in a 5-0 victory. Bridges came back the next day and fanned 14 and issued three walks in a 2-0 triumph.

Lessentine registered three shutouts and twirled a pair of no-hitters last week. The freshman hurler, struck out 33 and walked just one batter over 16 innings of work. Lessentine no-hit Gadsen in consecutive starts. She opened with a 16-strikeout, one-walk performance in a 4-0 victory. In the nightcap, Lessentine punched out 10 in a four-inning win. She added seven more strikeouts in a one-hit shutout over Las Cruces. In game two against the Panthers, Lessentine doubled twice and drove in five runs.