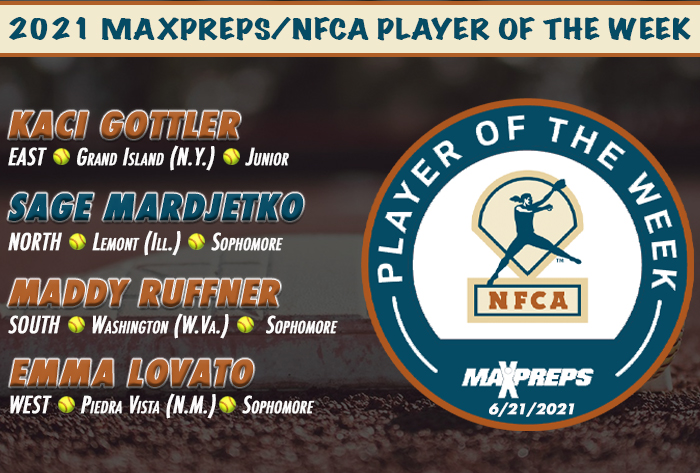 Gottler went 5-for-8 with two doubles, two triples and a home run in two wins last week. She drove in eight runs, scored seven times, posted a .727 on-base percentage and slugged 1.750. Gottler also went 2-0 in the circle with a 0.00 ERA and 13 strikeouts. The junior was 3-for-6 with two doubles, a triple, three RBI and four runs scored against Kenmore East. In that game, she also went the distance in a four-hit shutout with 10 punchouts and one walk. Against Niagara-Wheatfield, Gottler tripled, homered, drove in five and scored a pair of runs.

Mardjetko twirled a pair of shutouts, including a no-hitter, and struck out 25 over 13 innings of work. The sophomore hurler, no-hit Washington High School, fanning 16 and walking one. Against Ridgewood, Mardjetko recorded a two-hit shutout with nine punchouts and no walks. She also went 2-for-3 at the plate in that game with two doubles, two RBI and a run scored.

In a doubleheader sweep of Hedgesville, Ruffner was 2-0 with a 0.58 ERA, 19 strikeouts and zero walks over 12 innings of work, while going 6-for-6 with four RBI at the plate. She twirled a two-hit shutout with 12 strikeouts in the opener, driving in three runs. Ruffner went 4-for-4 with an RBI in game two. The sophomore hurler went the distance, allowed two runs, one earned, on six hits with seven punchouts.

Lovato went 2-0 with 0.50 ERA and 32 strikeouts in 14 innings. The sophomore tossed a two-hit shutout with 16 strikeouts against West Mesa. Lovato helped herself out at the plate, going 2-for-3 with a double, home run, three RBI and two runs scored. She also went the distance in a 6-1 win over Farmington. Lovato fanned 16 more batters and scattered six hits in the victory.