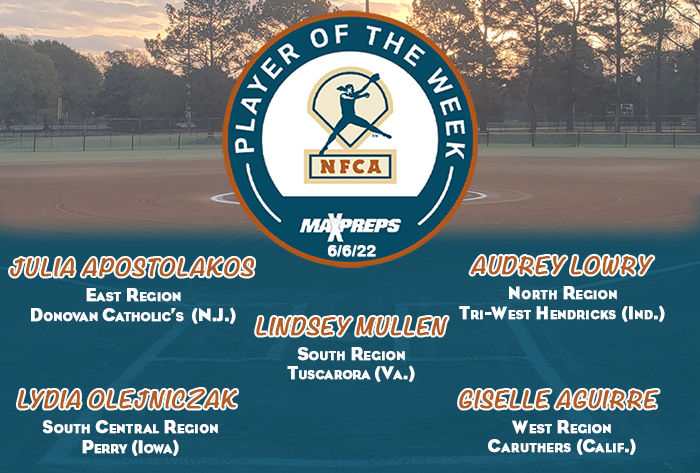 Apostolakos keyed Donovan Catholic to three victories and the 2022 New Jersey State Interscholastic Athletic Association (NJSIAA) Non-Public A title. The junior hurler allowed just two runs, one earned, on six hits with 45 strikeouts and four walks in 21 innings of work. In the final against Mount St. Dominic Academy, she twirled a two-hit shutout with 16 punchouts and also hit a bottom-of-the-sixth two-run homer in a 2-0 victory. Apostolakos fanned 14 and surrendered an unearned run versus St. Thomas Aquinas and followed that with a 15-K, one-hit, one-run outing versus Freehold Township in the semifinals.

Lowry fired the Bruins to an Indiana High School Athletic Association (IHSAA) semistate championship and a berth to this week’s state championship. She tossed back-to-back one-hit shutouts against Pike Central and Corydon Central, both 3-0 victories, in the semifinal and title games, respectively. Against Pike, Lowry fanned and did not walk a batter, and later that evening she sat down 16 Panthers without issuing a free pass. Over a three-game stretch, the sophomore was 3-0 with a 0.00 ERA and 42 strikeouts in 19 innings. She surrendered an unearned run on five hits with just one walk.

Mullen blanked Loudoun Valley on two hits and two walks in a 6-0 victory lifting the Huskies to a Virginia High School League Region 4C title. She also went 2-for-3 at the plate with an RBI. Earlier in the Week, Mullen twirled four perfect innings, striking out 10 of 12 batters in a big win over James Wood. For the week, she was 2-0 with a 0.00 ERA, surrendered two hits and fanned 20 batters.

Olejniczak batted .583 (7-for-12) with a double, triple two home runs , four RBI and nine runs scored. She swiped seven bases, walked four times, recorded a .688 on-base percentage and slugged 1.333. In a 12-7 win over Prairie City-Monroe, Olejniczak went 3-for-4  and was a triple short of the cycle. She scored four times, drove in two runs and registered a pair of stolen bases. The junior shortstop added two RBI and two runs scored with a homer versus Baxter and was a perfect 3-for-3 stealing bases and crossed the dish twice against Glenwood.

Aguirre was a catalyst for the Blue Raiders offense, keying Caruthers to a California Interscholastic Federation Southern California Division 5 state title. The sophomore outfielder was 6-for-8 (.750) with two doubles, five RBI and six runs scored over three games. Aguirre drew four walks, reached base at a .833 clip and slugged 1.000. In the title-winning game against Nipomo, she went 3-for4 with a double and run scored. Aguirre added three RBI and three runs scored in a semifinal triumph over Garfield. She also posted a double, two RBI and two runs versus Santee.