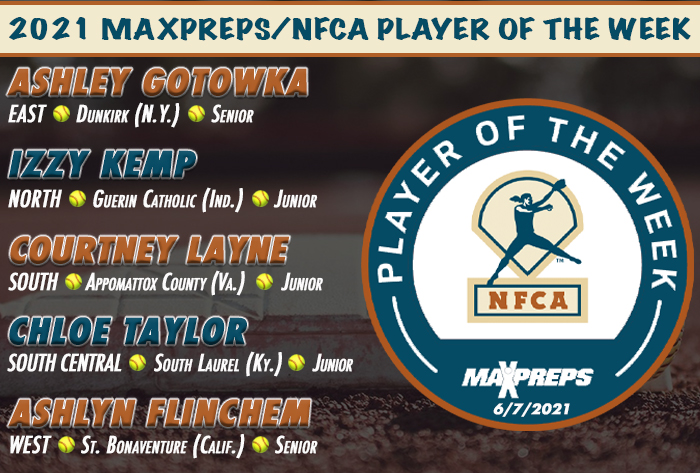 Gotowka went 4-0 with a 0.00 ERA, 52 strikeouts and a no-hitter last week for Dunkirk. In her no-hitter against Allegany-Limestone, Gotowka struck out 16 and did not issue a free pass in the 8-0 victory. The senior also twirled a two-hit shutout with 13 strikeouts and two walks in a 3-0 win against Olean. In a 3-2 triumph over Gowanda, she allowed two unearned runs, struck out 11 and walked one. Her final outing of the week saw Gotowka toss a one-hitter against Fredonia. She surrendered an unearned run, fanned 12 and walked four.

Over two starts, Kemp picked up two shutout wins and struck out 39 over 17 innings of work. She went the distance in a 10-inning one-hitter against Yorktown. In the 1-0 victory, she fanned 19 and walked one. On June 5, Kemp, a junior, struck out 20 of 21 batters in a perfect game versus Fort Wayne Bishop Dwenger. At the plate, Kemp was 3-for-5 with a double, two RBI and two runs scored in the perfect game. She also posted a 2-for-3 outing with a double and two runs scored versus Norwell.

Layne went 2-0 with a 0.00 ERA and 35 strikeouts in 14 innings of work. She fanned 19 and walked one in a one-hit shutout of Dan River. She also contributed offensively scoring two runs. Against Altavista Combined School, the junior hurler surrendered a pair of unearned runs in a one-hitter with 16 punchouts.

Taylor contributed both offensively and in the circle last week for South Laurel. The senior hit .875 (7-for-8) with a double, two triples, 10 RBI and eight runs scored. She slugged, 1.500 and owned a .909 on-base percentage. Taylor was a perfect 3-for-3 with a triple, six RBI and three runs scored versus Williamsburg. She also added a double, triple and three runs against Harlan County. In the circle, Taylor struck out nine, allowed a hit and an unearned run over four inning against Williamsburg. She posted three no-hit shutout innings versus Harlan County.

Flinchem twirled a pair of perfect games last week, retiring all 30 batter she faced. She struck out 14 in a 10-0 win over Cantwell-Sacred Heart of Mary on June 3. Two days later, the senior fanned 12 Sacred Heart of Jesus batters in a 14-0 victory. Flinchem also went 2-for-3 with a double, home run and two RBI in second perfecto.