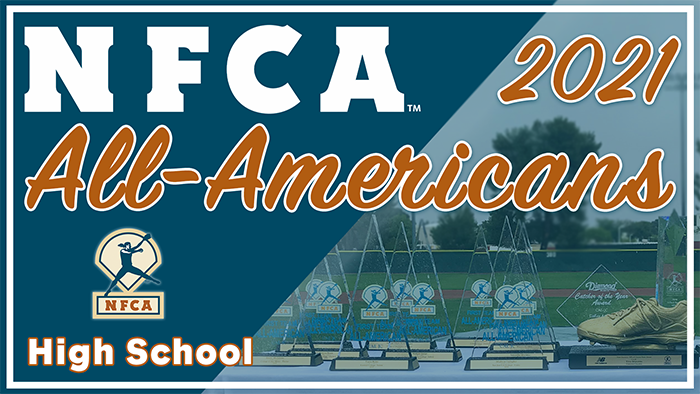 The NFCA High School All-America teams are voted on by a committee of member head coaches from the pool of players who were nominated and earned first-team All-Region recognition in the five high school regions. The three 16-member squads had representation from 19 different states.

Bahl led the Monarchs (36-0) to a second consecutive perfect season and the Class A state championship. Nebraska’s returning state Gatorade Softball Player of the Year posted a 27-0 record with a 0.10 ERA. The righty surrendered just 27 hits and 15 walks in 137 innings pitched, and struck out 316 batters. Offensively, Bahl batted .510 with 20 home runs and 55 RBI.

Guthrie, an at-large selection, finished up an accomplished prep career posting a 28-2 record with a 0.69 ERA and 310 strikeouts in 163 innings. She twirled 20 shutouts, walked just 24 batters and held the opposition to a .127 batting average. For her career, Guthrie finished with 92 wins, 1,017 strikeouts and a .90 ERA.

Rounding out the first team pitching selections is Keystone’s Lily Cassell. The junior hurler led the Wildcats to a state championship, 33-1 record, and a No. 9 ranking in the final the Super 25 Poll. Cassell posted a 30-1 mark with a 1.35 ERA and 255 strikeouts to 39 walks in 176.2 innings. She registered eight shutouts and held teams to a .165 batting average.

Taking home first-team honors at catcher were seniors Jacque Adams of Bryan and Sarah Stone from Bedford (Ind.) North Lawrence High School. Adams, the 2021 Diamond Sports/NFCA Catcher of the Year, hit .385 with 13 doubles, 16 home runs and 52 RBI. She scored 33 runs, slugged .797 and posted a .460 on-base percentage. Defensively, she recorded a .998 fielding percentage, committing just one error over 404 chances. Stone registered a .540 batting average, 10 doubles, 17 round trippers, 49 RBI and 47 runs scored. She slugged 1.264, drew 33 free passes and reached base at a .633 clip. Stone posted a .992 fielding percentage in 263 chances.

The rest of the first-team infield is made up of Sheldon’s D’Auna Johnson (first base), The Woodlands High School’s Kayla Falterman (second base) and Kinsey Fiedler (shortstop) out of Lee’s Summit (Mo.) North High School.

Johnson, a junior and All-Delta League selection, hit .525 with 10 doubles, three triple, five homers, 39 RBI and a .912 slugging percentage. Falterman was also voted the New Balance/NFCA Golden Shoe recipient for her prowess on the base paths. The senior was a perfect 50-for-50 swiping bases, while also hitting .515 with 67 hits, eight doubles, seven triples and 67 runs scored. Setting several single-season and career records during her senior season, Fiedler batted .417 (43 hits) with eight doubles, three triples, 17 home runs and 41 RBI. She scored 49 runs, slugged 1.049 and recorded 25 stolen bases.

Rounding out the first team with an at-large selection at first base is Chalea Clemmons of Cullman (Ala.) High School. The left-handed sophomore batted .514 (74 hits) with 20 doubles, 21 home runs and 65 RBI, all first-team bests (tied Bahl in home runs). She added 48 runs, a 1.104 slugging percentage and a .582 on-base percentage.