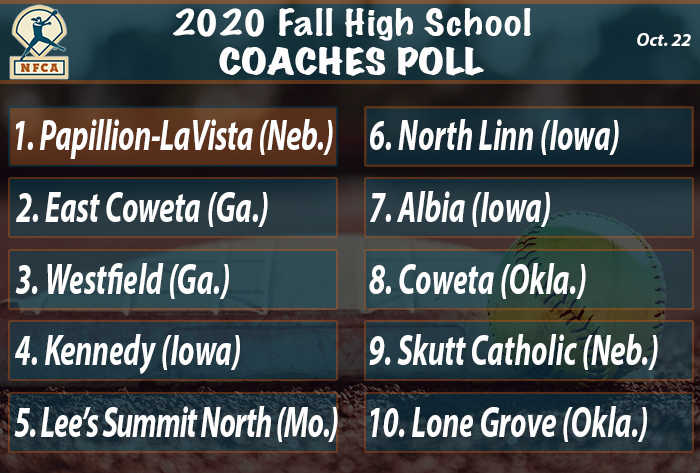 LOUISVILLE, Ky. — An undefeated run to a second-straight Nebraska Class A state championship has locked up the No. 1 final ranking for Papillion-LaVista with two weeks remaining in the 2020 NFCA Fall High School Top 25 Coaches Poll.

The (36-0) Monarchs extended their state-record win streak to 72 games with a pair of victories over North Platte. Oklahoma commit Jordyn Bahl tossed her third no-hitter of the tournament in last Saturday’s 12-0 triumph in the state final — her school-record 98th career win and state-record 57th straight victory — after a perfect game in a 3-0 win over the Bulldogs in the winner’s bracket final. At the plate, Bahl helped Papillion-LaVista set a single-season school mark of 73 homers in 2020.

Elsewhere, Oklahoma wrapped up its state tournament last Saturday, with No. 8 Coweta (Class 5A), No. 14 Tishomingo (3A) and No. 17 Southmoore (6A) winning titles.