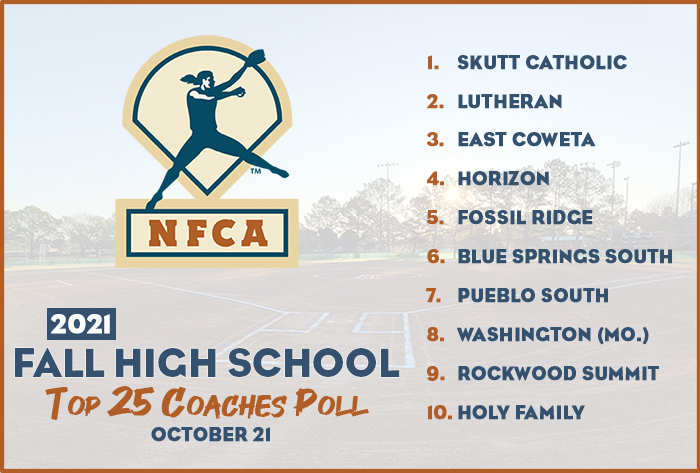 The (33-0) Skyhawks wrapped up the first perfect season in in the 25-year history of their class, soaring past No. 13 Hastings, 14-2, in last Friday’s state final that lasted just three innings. Skutt scored 11 runs and sent 17 batters to the plate in a top of the first that took 28 minutes.

Meanwhile, unbeaten second-ranked Lutheran (25-0) heads into this weekend’s Colorado state tournament as the top seed in Class 3A. The Lions have outscored their opponents 336-20 so far this season, with freshman Meredith Barnhart (.615 average, 10 homers, 53 RBI) leading the way on offense and sophomore Hailey Maestretti (232 strikeouts, .098 opponent average) shutting down batters on defense.

No. 3 East Coweta (24-1) punched its ticket for an eighth-straight Georgia Elite Eight after Wednesday’s 11-2 and 11-0 playoff sweep of Peachtree Ridge. The Indians have now reached the state quarterfinals in 15 of the last 16 seasons, and are seeking their fourth state Class 7A title since 2017.

Elsewhere, No. 6 Blue Springs South (28-4) finds itself in the top 10 after a 4-0 run through the Missouri district tournament, which featured four state-ranked squads. The Jaguars face Nixa later today in their Class 5 state tournament opener. No. 12 Southmoore (33-6) returns to the rankings following last weekend’s 5-1 victory over Owasso in the Oklahoma Class 6A state final.