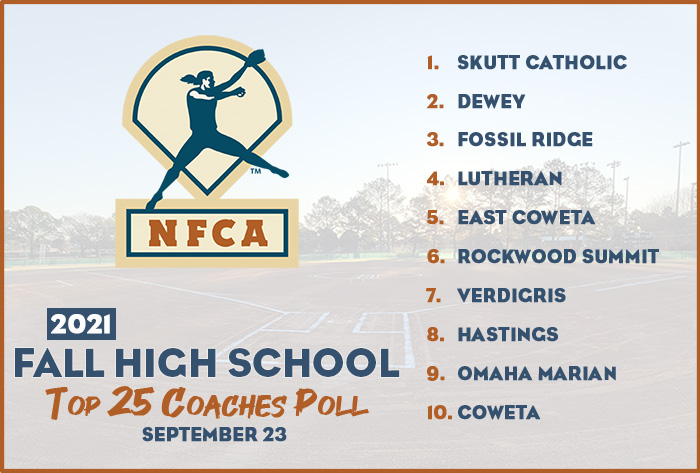 LOUISVILLE, Ky. — Unbeaten Skutt Catholic continued to roll along, going 5-0 over the past week, to continue as the undisputed No. 1 in the NFCA Fall High School Top 25 Coaches Poll.

Dewey (27-1) also recorded a 5-0 week to keep pace in the second spot, beating Kiefer in its two most recent contests, a pair of high-scoring affairs on Monday and Tuesday.

Meanwhile, Fossil Ridge, Lutheran and East Coweta each moved up one spot to round out the first five teams. Fossil Ridge and Lutheran are both 15-0 in Colorado, while Georgia power East Coweta (14-1) rolled past Pike County on Wednesday for its seventh straight shutout, which extended its scoreless innings streak to 41.

Elsewhere, Missouri’s trio of Rockwood Summit (sixth, 18-1), Rock Bridge (15th, 18-4) and Blue Springs South (16th, 18-4) all slipped slightly in the rankings following losses. Rockwood Summit’s loss was a 7-6 walkoff at the hands of Eureka (15-1) last Thursday, and the Falcons responded by routing Lindbergh, 17-0, on Monday and ripping Northwest (Cedar Hill), 11-0, on Tuesday.