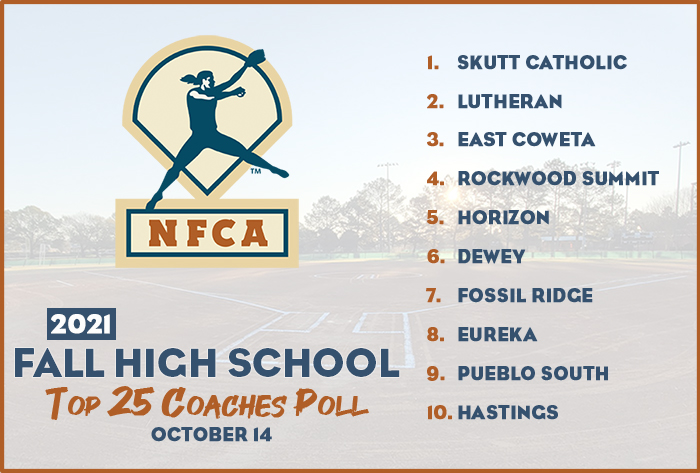 The (31-0) Skyhawks took two games from O’Neill last week, then defeated Norris, 5-1, and rolled past Bennington, 8-1, on Wednesday in state play. Skutt plays 10th-ranked Hastings (34-4) in a winner’s bracket game later today for a berth in Friday’s state final. The Skyhawks are vying to complete the first undefeated season in the 25-year history of Nebraska’s Class B tournament.

Meanwhile, No. 2 Lutheran (23-0) continued its perfect season, defeating Wheat Ridge, 11-2, last Friday. The Lions have a Colorado Class 3A, Region 1 semifinal game against Sand Creek on Saturday, with the winner guaranteed a spot (the two finalists in each region both qualify) in the state tournament.

Defending Georgia state 7A titlist East Coweta (22-1) wrapped up a first-round playoff series on Wednesday, sweeping Brookwood, 5-1 and 9-4. Jaliyah Holmes was again dominant in the circle for the third-ranked Indians, fanning 17 batters for the two games, while Emma Elrod had three homers in the doubleheader.

No. 10 Washington (35-5) claimed one of the Oklahoma state titles that were decided last weekend, routing Coalgate, 12-0, in the Class 3A final, after dispatching Comanche, 10-0, in the semis. Poll newcomer Silo (36-7) is the other ranked Oklahoma state champion, joining the mix this week at No. 21 following Saturday’s 2-1 Class 2A victory over Morrison. The remaining Oklahoma classes open their state quarterfinals today at the USA Softball Hall of Fame complex.