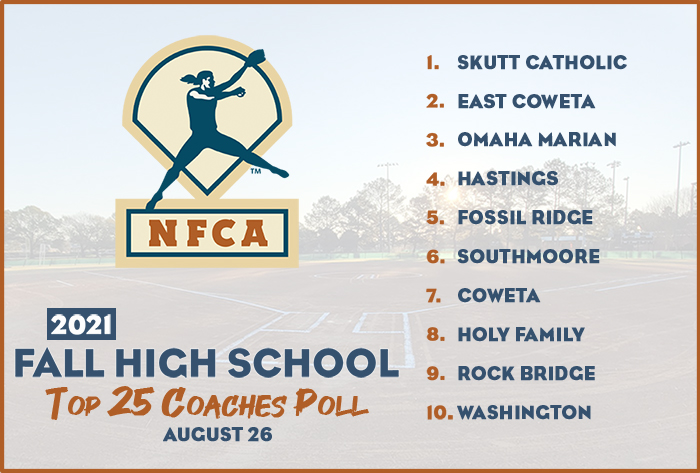 LOUISVILLE, Ky. — Nebraska’s Skutt Catholic is off to a perfect start to its season, including a 14-1 victory over in-state rival and 2020’s top-ranked team, Papillion-LaVista, to open this year’s NFCA Fall High School Top 25 Coaches Poll in the No. 1 spot.

Perrenial power Papillion-LaVista, which could be in a rare rebuilding position after losing 10 seniors, including Gatorade National Player of the Year Jordyn Bahl, in the offseason, is now 2-3 and unranked, after winning its first two games of 2021.

Meanwhile, reigning Georgia state 7A titlist East Coweta (8-1) is rolling again at No. 2 behind junior Jaliyah Holmes, who tossed a perfect game and fanned 17 of 21 batters in a 4-0 win over McEachern on Tuesday and is already a third of the way to the school-record 270 strikeouts she posted last season.

Elsewhere, first-time champions Fort Dodge (38-4) and Western Dubuque (35-7) are among five Iowa state titlists in the first ranking. North Linn (42-6) is also in the mix after claiming its second crown in the last three seasons.