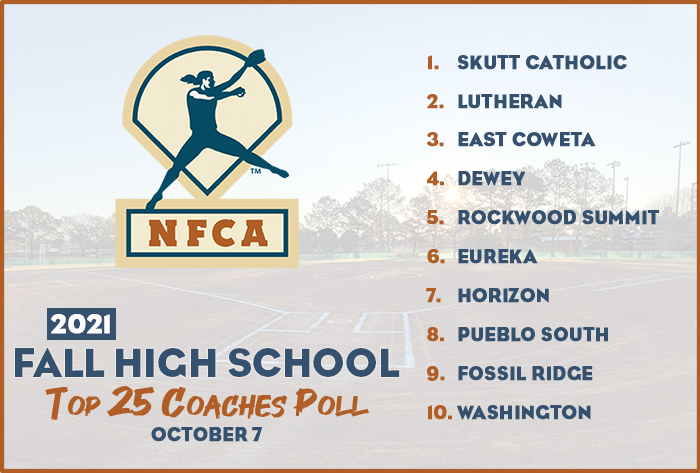 LOUISVILLE, Ky. —Skutt Catholic tuned up for the postseason with five more wins to easily remain atop the NFCA Fall High School Top 25 Coaches Poll, and plenty of others followed their lead with unbeaten weeks of their own.

The (27-0) Skyhawks strengthened their firm grip on the No. 1 spot, outscoring their five opponents 51-0 over the last week. They are the top seed in Nebraska’s Class B and host a best-of-three series with No. 16 seed O’Neill that will determine the state tournament teams starting later today.

In all, 17 ranked teams were perfect over the last seven days, including nine of the top 10 squads. Second-ranked Lutheran (22-0) stayed unbeaten for the season, allowing just one run in three lopsided victories. No. 3 East Coweta (20-1) dodged a scare last Friday against Northgate, then defeated Columbus and Heard County to get set for today’s first-round matchup against McEachern in Georgia’s Region 2-7A tournament.

Elsewhere, No. 18 North Gwinnett (21-4-1) improved its standing with a 5-0 week that included a seven-run top of the 10th in a 12-5 triumph over Mountain View on Tuesday. No. 19 Minco also added five wins to its resume to gain the same three places in the rankings.