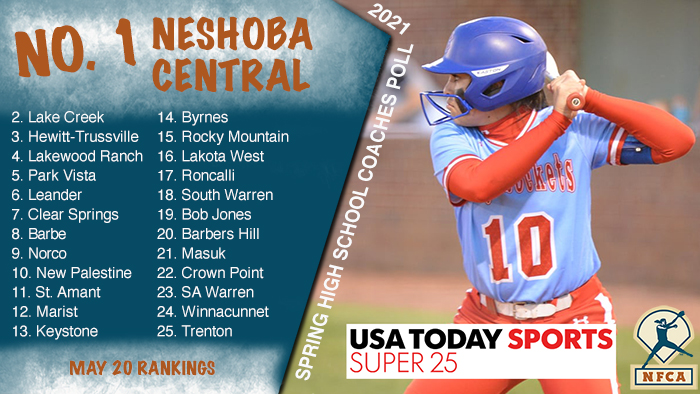 LOUISVILLE, Ky. — Another year, another state title for Neshoba Central.

The top-ranked (32-0) Rockets capped their run to an eighth straight Mississippi Class 5A crown with the second of two victories over East Central, 14-0, last Friday. Neshoba opened the best-of-three championship series with a 7-3 victory last Thursday. The No. 1 team in the USA TODAY Sports/NFCA High School Super 25 heads into the offseason having won 39 consecutive games.

Second-ranked Lake Creek (37-0) rolled to a 16-0 triumph in last Friday’s Texas 5A playoff showdown with Magnolia West, and will face Crosby tonight. No. 3 Hewitt-Trussville topped Baker, 5-4, this morning, and will face the winner of the Hoover-Sparkman matchup at 1:30 p.m. today, then potentially play another contest at 5 p.m. to set up Friday’s Alabama state 7A championship.

In that 5 p.m. contest, Hewitt-Trussville could face No. 19 Bob Jones (35-4), who blanked Thompson, 5-0, this morning, and will play the winner of the earlier Fairhope-Vestavia Hills matchup at 1:30 p.m.

Meanwhile, No. 4 Lakewood Ranch (28-2) competes in its third straight Florida 7A final four on Friday against Palmetto Bay, after dispatching West Orange, 7-2, in their regional final last Friday. Park Vista (28-0), Leander (34-1) and Clear Springs (28-0) all advanced in their respective state tournament brackets to remain fifth through seventh this week.