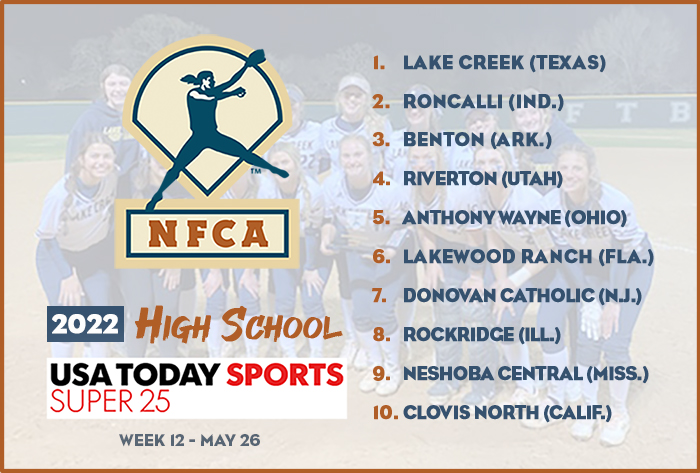 LOUISVILLE, Ky. — Top-ranked Lake Creek wrapped up one playoff series and can wrap up another later today, as it continues as the unbeaten, undisputed No. 1 team in the USA TODAY Sports/NFCA High School Super 25 for a 10th week.

The (38-0) Lions roared past Friendswood, 10-0, last Thursday, then defeated Santa Fe, 5-0, on Wednesday in the first game of a best-of-three Texas 5A regional playoff series.

Meanwhile, No. 2 Roncalli (29-0) and third-ranked Benton (32-0) stayed perfect as well. The Royals cruised past No. 22 New Palestine, 8-0, on Wednesday, while the No. 3 Panthers defeated Greene County Tech, 3-2, last Saturday to capture the Arkansas state Class 5A title.

Anthony Wayne (30-1) dropped one place, to fifth, in the aftermath of Wednesday’s stunning 5-4 eight-inning loss to Springfield in the Ohio Division I regional semifinals. Riverton (26-1) went 5-0 for the week to swap places with the Generals, taking over the No. 4 position.

Unbeaten Rockridge (30-0), the reigning Illinois state 2A titlist, which was a perfect 29-0 last season, is the lone newcomer this week at No. 8. The Rockets haven’t lost in nearly three years, since falling 5-4 to Beecher in the playoffs on May 31, 2019.

Other movement was the result of losses by Clovis North, Lexington, Alexander Central and Allen Park. Clovis North fell three places to No. 10, while the second two dropped seven places apiece, to 20th and 21st, respectively. Allen Park dropped out of the rankings following its defeat.