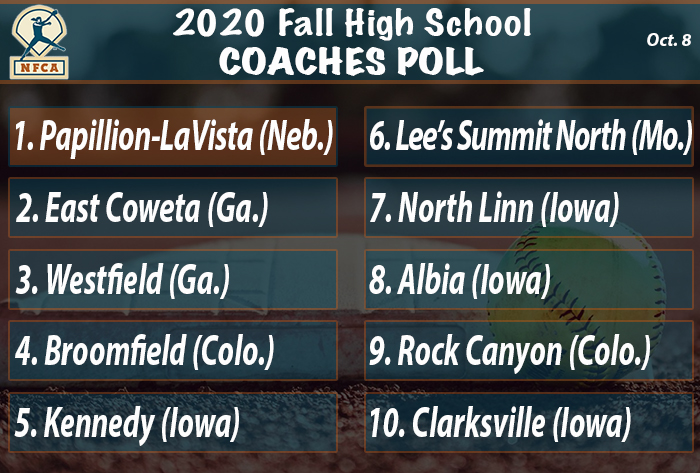 On Wednesday, the reigning Nebraska Class A champion (31-0) Monarchs opened district play with a pair of lopsided victories over Lincoln and Gretna to extend their state-record win streak to 67. Bailee Lampman had a no-hitter and struck out five, while Kate Voisin and Mia Jarecki each hit grand slams in a nine-run third against Lincoln, while Oklahoma commit Jordyn Bahl notched her school-record 93rd career win and state-record 52nd straight victory versus Gretna. Voisin’s three-run homer last Thursday keyed a four-run first in a 7-0 shutout of Millard South.

East Coweta (23-1), meanwhile, won both of its games since last week to remain solidly in the No. 2 position. Kylie Ferguson followed up last Thursday’s three-homer performance against Columbus with two more home runs in Wednesday’s 10-2 win over No. 3 Westfield.

The (23-2) Hornets won their other six contests this week to stay third in the poll, ahead of Colorado’s Broomfield (15-1) and Iowa 5A state champion Kennedy (26-1), with Missouri power Lee’s Summit North looming just outside the top five. The (23-2) Broncos have won 10 straight since a 3-1 loss at top-ranked Papillion-LaVista on Sept. 26.

Elsewhere, Southmoore (28-4) and Omaha Marian (23-6) both returned to the rankings after a two-week absence, where they are joined by poll newcomer Dewey (28-3), which has won its last nine games.