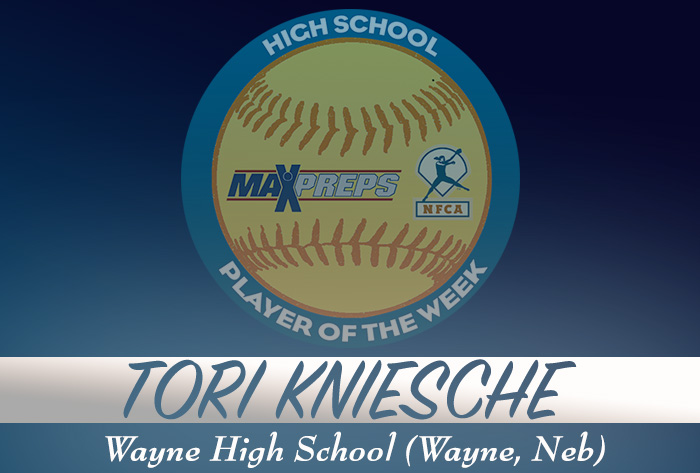 LOUISVILLE, Ky. – Tori Kniesche of Wayne (Neb.) High School was named MaxPreps/NFCA National High School Player of the Week for her outstanding play during the week of Aug.13-19.

Kniesche dominated her opponents in the circle last week, tossing three no-hitters, including a perfect game, and striking out 51 batters. The dominant righty surrendered just one hit and walked four as she posted a 4-0 mark in Wayne’s first week of play. After a one-hit, 15-strikeout performance in a 2-0 win over Butler, Kniesche, tossed 15 innings of hitless ball during the Wayne Invitational.

She opened the tournament fanning eight of nine batters in three-inning win over Ponca. In the semifinals, Kniesche fanned 14 of 18 batters and no-hit Twin River in a 3-0 triumph for the Blue Devils. The junior capped off the tournament with a perfect game and 14 more punchouts in the title game, a 3-0 victory over Arlington.