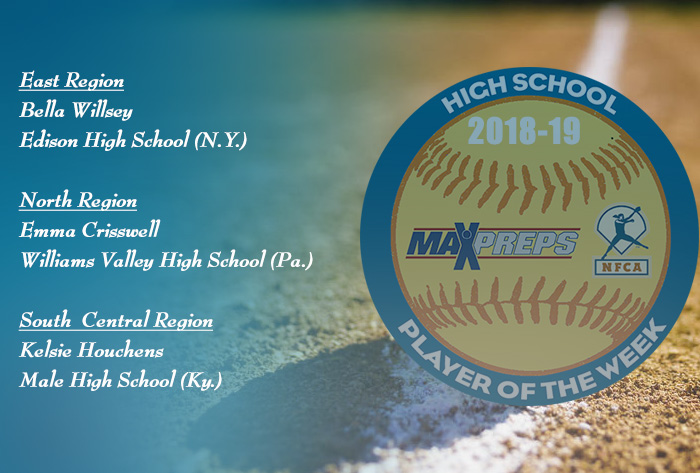 East Region
Willsey was a key component in Edison claiming the 2019 NYSPHSAA Class C state title. The senior righty twirled a 14-strikeout no-hitter in the state semifinal win over St. Lawrence Central. She faced just one batter over the minimum and also went 3-for-4 at the plate with a double, home run and two RBI in the 12-0 win. In the championship game, Willsey tossed a four-hit shutout versus Warsaw. She fanned eight, walked one and recorded a double and RBI.

North Region
In the PIAA 1A title game, Crisswell fired a four-hit shutout against Dubois Central Catholic as the Vikings won 5-0. The sophomore hurler struck out four and did not walk a batter, leading Williams Valley to its third state championship. Crisswell also chipped in at the plate. She recorded a two-run double to extend her team’s lead to 3-0 in the bottom of the third.

South Central Region
Houchens was 3-0 with a 0.00 ERA and tossed a perfect game in the KHSAA state quarterfinals to help Male capture a 2019 state title and finish off a perfect 39-0 season. Against Boyle County, she struck out 10 and retired all 21 batters in a 4-0 quarterfinal win. In the semifinals versus Clay County, Houchens provided four innings of hitless relief with seven strikeouts in a 2-1 eight-inning victory. The junior righty capped off a stellar weekend with a five-hit complete game effort in which Houchens fanned nine and walked one. She appeared in all three games, including two starts, surrendering one unearned run on five hits with 26 strikeouts and just one walk in 18 innings of work.