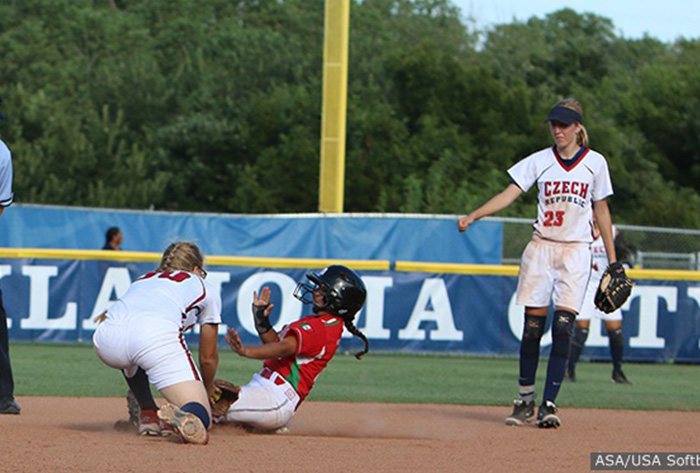 OKLAHOMA CITY — The schedules are set for both the Championship and Placement divisions at the 2015 World Baseball Softball Confederation (WBSC) Junior Women’s World Championship (JWWC) as the final day of preliminary rounds concluded in Oklahoma City, Okla. Team USA and Japan both earned the No. 1 seed in their respective pools to earn No. 1 seeds in the Championship rounds while Canada, China, Czech Republic, Mexico, New Zealand and Puerto Rico all also earned a spot in the playoffs.  All eight teams will enter into a double page playoff with the Bronze Medal Game slated for 4 p.m. CST and the Gold Medal Game occurring at 7 p.m. CST on Saturday, August 15.  In addition to the Championship rounds being set, seven teams have entered into the placement bracket with the Championship Game, which will result in a ninth place finish, taking place at 1 p.m. CST on Saturday, August 15.  All games will be played on historic OGE Energy Field at the ASA Hall of Fame Stadium.

Below is the schedule for Thursday, August 13:

Australia earned an bye from action on Thursday after earning the B5 seed in the placement bracket.  They will await the winner of the placement round game No. 4 for a 4 p.m. matchup on Friday.

Veronika Peckova had a day, throwing a no-hitter in Czech Republic's 1-0 victory over Australia.  Pecknova was nearly perfect through seven innings, striking out 13 batters with the sole runner of the game reaching on a walk.

Sabina Vitkova helped Czech Republic seal the win in the top of the seventh inning.  With the game threatening to go into extra innings, Julie Coufalova singled with one out to get a runner on base for the Czech Republic and was lifted for a pinch runner, Natalie Kalouskova.   Kalouskova came around to score on a fielder's choice off a Vitkova grounder.

Japan remained perfect at the WBSC JWWC with a 19-0 (four inning) win over China in their final game of the preliminary rounds.  With the win, Japan earned the No. 1 seed in Pool A.

Japan's pitching staff has continued to shine at the WBSC JWWC, giving up zero runs through six games played.  Japan jumped out to an early lead, scoring two runs in the top of the first and following with an additional two runs in the second inning.  Combined with seven runs in the next two innings, Japan's offense combined for 16 hits in the win.

China managed just one hit off Japan's pitching staff as Haruka Fukui earned the win with two strikeouts and no hits allowed through two innings of work.  China's Qi Aijun suffered the loss, issuing five runs and six hits through two innings in the circle.

Mexico earned the No. 2 seed in Pool B as they defeated Australia 2-1 in the two teams final game of the preliminary rounds.  With the loss, Australia earned the No. 5 Pool B seed in the placement rounds at the WBSC JWWC.

Australia scored one run in the fifth on an RBI single by Alicia Forte, but was unable to take the lead back from Mexico who scored two runs earlier in the inning.

Gabrielle Plain took the loss for Australia, issuing four walks and two runs while striking out nine batters.  Mexico's Cielo Meza picked up the win, going the full seven innings with eight strikeouts, one walk and one run allowed.

Team USA continued their strong performance at the WBSSSC JWWC today at OGE Energy Field in their first game of the day against Mexico.  Team USA came out firing in the first inning as Alyssa Palomino (Mission Viejo, Calif.) brought in two RBI to set the pace as her hot streak continues at the JWWC.  Kelly Barnhill (Marietta, Ga.) showed off her full arsenal of pitches as she continued to stifle batters en route to a no-hitter. The game ended via run rule courtesy of Palomino’s grand slam in the top of the third inning.

“Everything is a lot easier when you have great pitching and Kelly was on today,” said Tairia Flowers (Tucson, Ariz.), Head Coach of the USA Softball Junior Women’s National Team. “Our team’s mindset is really good right now. Alyssa’s hitting is very solid and we hope that she can continue that into the playoffs.”

Palomino went a perfect 3-for-3 at the plate, brought in six RBI and scored three times.

“It felt good,” said Palomino. “I’ve been in a good rhythm here at the Junior Worlds and just have been trying to make plays for our team.”

It took only three innings for Barnhill to notch the win, as she allowed no hits and struck out six. Samantha Urbina took the loss for Mexico, as she lasted only two innings and gave up eight earned runs.

Team USA once again came out strong in the first inning and rolled to a 7-0 win over Czech Republic in their final game of the preliminary rounds. Czech Republic batters were not able to locate Zoe Conley’s (Berkeley, Calif.) pitches all game as Conley threw a no-hitter, striking out 10 batters in five innings of work. A couple of big two-run home runs by Jenna Lilley (North Canton, Ohio) and Madilyn Nickles (Merced, Calif.) in the first got Team USA out front early. Czech Republic was never able to recover after Team USA’s explosive first inning.

“Another nice win for us tonight,” said Flowers. “We made some solid plays defensively that helped out Zoe. We’re glad to come out on top of our pool, but we know that there is still a lot of work to do to reach our ultimate goal at this Championship. We’ve got what it takes to get the Gold, it’s just up to us to come together during the playoffs and make it happen.”

“I was in a good rhythm,” said Conley. “It’s definitely a big confidence booster for me to come out and be successful like I was tonight. Our team is excited to start the playoff rounds to prove what we’re made of.”

In total, Team USA has outscored teams 82-3 and improved their record to 7-0 to finish pool play. Looking forward to tomorrow, Team USA plays No. 2 Pool A seed Canada at 7:30 p.m. CST at OGE Energy Field.

.Gold Passes and single session tickets can be purchased at the box office of OGE Energy Field.

All games will be streamed live at no cost to fans through the official event website. There will be expanded coverage, beginning Thursday, August 13, featuring play-by-play and color commentary, in-game interviews, instant replays and unique camera shots. Visit2015jwwc.com

and keep up all week on the event’s officialFacebookandTwitter. Fans can also visitwww.wbsc.co