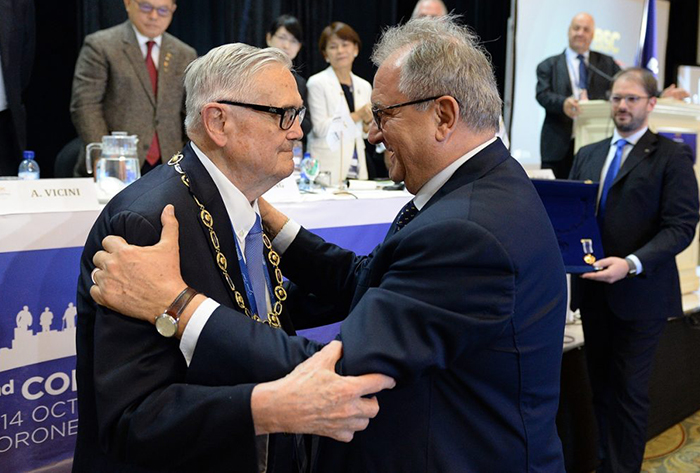 GABORONE, Botswana — NFCA member Don Porter was awarded by President Riccardo Fraccari the Collar of Honor, WBSC supreme recognition of those people who contributed to the foundation of the Confederation and its success.

“I want to let you know how much I appreciate this," siad Porter. "I want to thank you all that are sitting here today and remeber those who are not among us anymore. I think of them every day”.

He became the Executive Director of the Amateur Softball Association in 1963 and the Secretary General of ISF in 1965. He was elected ISF President in 1987 and led the Federation until 2013. In his career he served on various Commission of the United States Olympic Commitee (USOC; 1984-1988), on the international Council of the General Association of International Sport Federations (GAISF) and is a founder of the World Games. Last but not least, he was a referee (1976-1979) in the National Football League (NFL).

Fourteen new members — including Olympic medallists, umpires and coaches — from seven nations and four continents were elected into the WBSC Softball Hall of Fame

New Zealand led with three new members, while Australia, Bahamas, Colombia and Guatemala each had two.

Aussie softball legends Melanie Roche and Natalie Ward played at every Olympic Games in which softball has been featured, winning the silver medal with the Australian National Team in 2004 and bronze in 1996, 2000 and 2008.

The latest inductees into the WBSC Softball Hall of Fame raises the total membership to 225.

The Softball Hall of Fame was established in 1981 and inducts new members every two years.