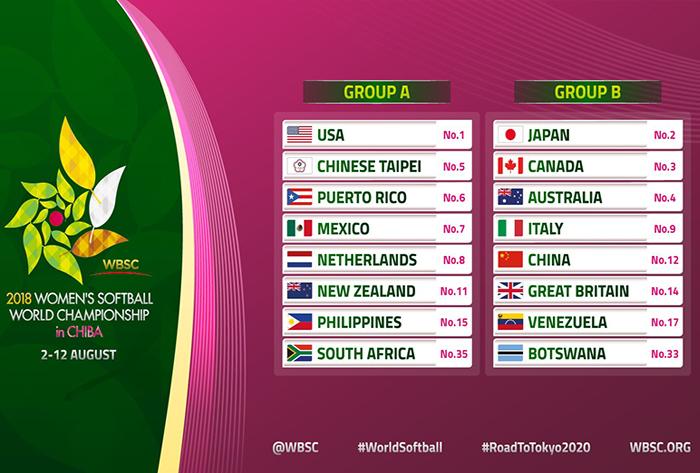 The softball global flagship competition will feature 73 games across 10 days of competition.

The top nation in Chiba will claim the first of five available softball spots for the Olympic Games Tokyo 2020, where Softball Japan is automatically qualified.

“The Women’s Softball World Championship in Chiba will be an exciting and challenging 73-game top-tier global competition,” said WBSC President Riccardo Fraccari. “The stakes will be extremely high with the tournament awarding one nation a ticket to be a part softball’s historic Olympic return at the Tokyo 2020 Games — this is where softball’s Road to Tokyo 2020 begins.”

The 16 participating nations — representing the five Olympic continents — have been drawn into two groups.

Following the Opening Ceremony on August 2 at 18:30 JT, Japan and Italy will officially open the tournament.

The top four finishers from each group will advance to the double page playoff round. Nations not advancing will compete in the placement round.

has been named the official ticketing site of the WBSC Women’s Softball World Cup 2018 Chiba. Ticket sales within Japan launched today, while global sales will be begin on Saturday, 19 May.