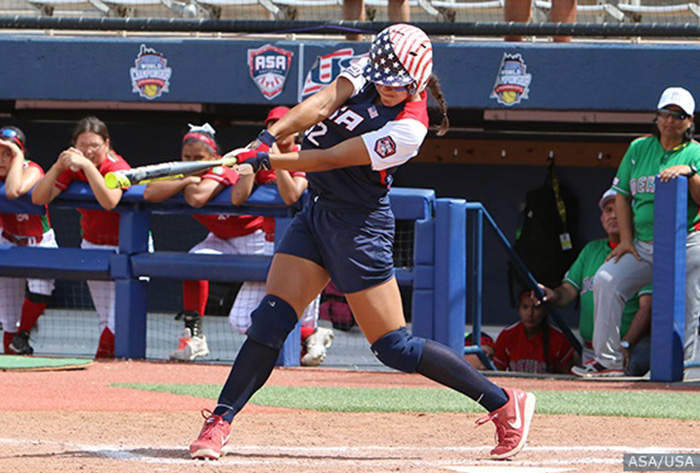 Below is the schedule for Friday, August 14:

The USA Softball Junior Women’s National Team surged to a big win at the 2015 World Baseball Softball Confederation (WBSC) Junior Women’s World Championship (JWWC) today in Oklahoma City, Okla. at the ASA Hall of Fame Complex. Team USA’s offense continued to shine as the Eagles rolled to a 15-0 (three innings) win over Canada to remain undefeated. Kelly Barnhill (Marietta, Ga.) was dominant once again from the circle as she gave up only one hit in the win. Wins from Japan and Team USA today have set up a showdown between the two teams tomorrow night at OGE Energy Field at 7:30 p.m. CST.

Canada came out strong in the first inning, as Kelsey Jenkins started things off with a double in the first at-bat. From that point on it was all Team USA as the U.S. responded in kind in the bottom of the first.  Sydney Romero (Temecula, Calif.) started things with a two-run double that brought in Nicole DeWitt (Garden Grove, Calif.) and Jenna Lilley (North Canton, Ohio). Team USA broke open the game in the second, as hits from Lilley, DeWitt and Madilyn Nickles (Merced, Calif.) led to additional runs for the U.S. Alyssa Palomino (Mission Viejo, Calif.) continued her hot streak with a two-run home run, her third at the WBSC JWWC.

Team USA closed out the game with a huge third inning filled with seven runs en route to the big win. Palomino brought in two more runs that inning with a triple.

“When our team plays with energy like we did tonight, we can beat anyone,” said Tairia Flowers (Tucson, Ariz.), Head Coach of the USA Softball Junior Women’s National Team. “This was a very good win for us tonight. We’re sky high for tomorrow’s big game. We’re going to put everything into getting a win tomorrow.”

Palomino went 2-for-3, scored twice and had four RBI. Palomino has been lights out at the plate for the U.S., hitting .526 with 19 RBI and three home runs.

“Right now I’m in a good place” said Palomino. “I’m able to work the count and wait until the pitch that I want. This was a great win for us tonight and puts us into a big time showdown with Japan tomorrow. I can’t wait.”

It took only three innings for Barnhill and Team USA to collect the win, as she gave up only one hit and struck out six. Madison Clarke took the loss for Canada, as she lasted only one and one-third innings and gave up six earned runs.

Serena Boniardi kept Argentina off the board during her seven innings of work as the Italian eliminated Argentina from the WBSC JWWC by a score of 4-0. Boniardi allowed just five hits from the circle while issuing no walks and seven strikeouts.

Erika Piancastelli racked up two RBI on two hits for Italy, singling in the fourth inning while knocking out a home run in the fifth inning.  Mo Candelaria Acuna ended up on the wrong side of the pitching decision, charged with the loss. She issued one walk with four runs allowed while striking out four through seven innings of work.

A great performance by Puerto Rico's Meghan King helped keep her team alive in the Championship Bracket at the WBSC JWWC as Puerto Rico captured a 2-0, eight inning win over China.  King kept China off the scoreboard as she collected a shutout win while striking out seven batters in the process.

Sabrina Stutman helped Puerto Rico take the lead in the top of the eighth inning after the game went into the international tie breaker (ITB) rule. With the game scoreless, Stutman came to the plate and hit a sacrifice fly score Shemiah Sanchez, who was placed on second base to start the inning due to ITB.  Puerto Rico added another security run on a sac fly from Kiara Resto.

Ping Fan was charged with the loss, issuing five walks and one run while striking out three batters.

Haruka Fukui tossed six scoreless innings to carry Japan to a 6-0 victory over Mexico at the WBSC JWWC. Japan's offense utilized seven hits, including two extra-base hits, to further them in the Championship Bracket.

Japan was led by a flawless day at the plate by Yui Sakamoto, who went 3-3 against Mexico's pitching. She singled in the second, fifth and sixth innings.

Yeraldin Carrion took the loss for Mexico. She lasted just four and one-third innings, walked six, struck out one and allowed four runs.

Brazil captured their first win at the WBSC JWWC as Fernanda Shiroma threw nine scoreless innings to carry Brazil to a 6-3 (12 innings) victory over Great Britain.

Neither team scored until the fourth when Great Britain got on the board, scoring on an RBI single by Ashleigh Carolan and Brazil forced the game into extra innings after scoring in the top of the seventh.

Brazil was sparked by Mariana Pereira and Rebeca Laudino, who teamed up for four hits and two RBI.

.Gold Passes and single session tickets can be purchased at the box office of OGE Energy Field.

All games will be streamed live at no cost to fans through the official event website. There will be expanded coverage, beginning Thursday, August 13, featuring play-by-play and color commentary, in-game interviews, instant replays and unique camera shots. Visit2015jwwc.com

and keep up all week on the event’s officialFacebookandTwitter. Fans can also visitwww.wbsc.co