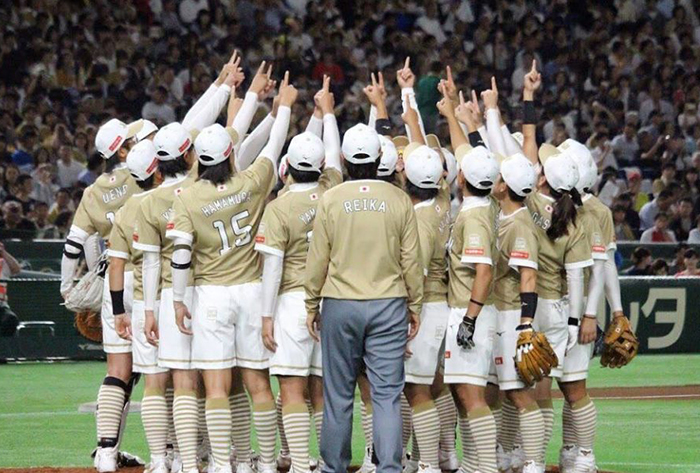 TOKYO - Hosts and World No. 2 Japan completed a three-game sweep over World No.1 United States in the WBSC-sanctioned Japan All-Star Softball Series. Overall, the successful women's international softball series attracted approximately 40,000 fans to the Tokyo Dome, Shellcom Sendai and Fukushima Azuma Stadium -- one of the venues in which baseball and softball will make their historic Olympic return at the Tokyo 2020 Games.
Series Recap
Japan took the first game of the All-Star Softball Series, defeating the U.S. 4-0 in front of more than 15,000 fans at the iconic Tokyo Dome. Japan's three-run first inning was key, with Beijing 2008 Olympic Gold medal-winning pitcher Yukiko Ueno sealing the win in four innings of work.
Game 2 was tied 1-1 until the hosts scored four times in the fifth inning to claim a 6-3 win at Shellcom Sendai.
Japan completed the sweep over the U.S. with a 2-0 win at Fukushima Azuma Stadium. Olympic gold medallist Eri Yamada hit a two-run home run to support Ueno's pitching performance.
Players from 2020, 2024 and 2028 Olympic host nations speak out
The All-Star Series in Japan was a promising prelude to softball's return to the Olympic Program at Tokyo 2020, with tens of thousands of fans treated to a relentlessly high quality and competitive spectacle between the world's leading players.
Japan Captain and Olympian Eri Yamada said:
"This has been a great warm-up for our sport's Olympic comeback in 2020, with top quality competition and great fans throughout the All-Star Series. Every athlete dreams of playing at the Olympic Games in front of a home crowd. I am sure that Olympic baseball and softball will be among the highlights of Tokyo 2020."
U.S. Women's National Softball Team member Amanda Chidester said:
"The team and I always look forward to the opportunity to play here in Japan. There is always a large fan base that is extremely passionate, which makes it that much more exciting for the Olympics to be played here in 2020. Match-ups like this and the support we have from all ages show what both baseball and softball have to offer the Olympic Games, and Japan is the perfect place to kick-start softball's return to the Olympic platform."
The French Women's National Softball Team were observers throughout the Japan All-Star Series, along with representatives of the French Baseball and Softball Federation (FFBS). The day before the opening match, the Japan Softball Association (JSA) and FFBS signed an MOU

aimed at supporting the growth of softball at every level in France and, ultimately, securing softball's place at the Paris 2024 Olympic Games.
French Women's National Softball Team player, Eloise Tribolet, said:
"This was an exciting opportunity to come to a heartland of softball and train with some of the world's best players. The experience will help the French national team take the next step in our development. The Olympic Games returns to France in the FFBS' centenary year, 2024 -- playing at the Games in front of a home crowd would be an incredible way to celebrate the 100th anniversary of French baseball and softball."
As a first concrete output from the MOU, during their stay in Japan, the French Women's National Softball Team had the opportunity to train with some of the world best talents, while participating to sessions with Japan Softball League's Bic Camera Takasaki and Taiyo Yuden teams, as well as with softball legend and WBSC Executive Board Member Taeko Utsugi. France's coaches also observed the training techniques that have earned Japan and the U.S. the top two places in the WBSC Softball World Rankings since 2015.
-- Courtesy of WBSC