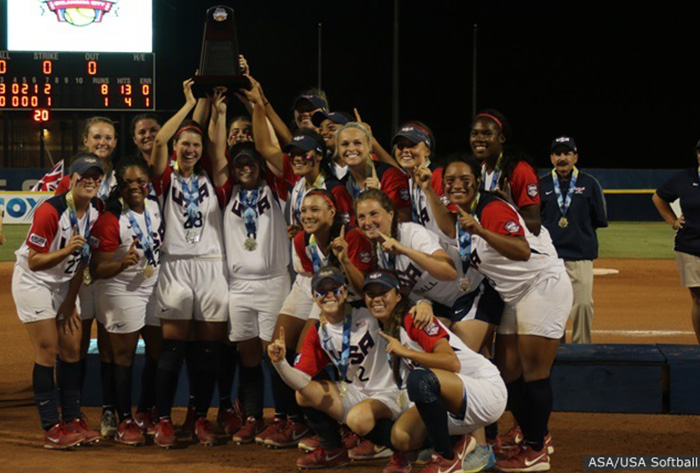 OKLAHOMA CITY — The USA Softball Junior Women’s National Team are once again World Champions as the Eagles cruised to an 8-1 win over Japan in the Gold Medal Game at the 2015 World Baseball Softball Confederation (WBSC) Junior Women’s World Championship (JWWC).  Team USA’s offense was the story throughout this Championship, as the team finished the tournament with a team-leading .425 batting average while scoring 119 runs in 10 games played.

“I can’t speak more highly of this team,” said Tairia Flowers (Tucson, Ariz.), Head Coach of the USA Softball Junior Women’s National Team. “The way that they all came together at the beginning of summer at training camp has been amazing. We were together for a long time this summer, which sometimes can be good or bad. They definitely grew and figured out how to win together. The way that they approached this tournament was amazing. Every pitch I felt we were locked in and everyone contributed. I’m extremely proud of them.”

The game started off at a stalemate as both teams felt out one another until Jenna Lilley (North Canton, Ohio) broke the game open in the third inning with a deep three-run bomb to left field. Japan left several runners on base, as Team USA backed up Kelly Barnhill (Marietta, Ga.) in the circle. Barnhill dominated all seven innings as she continued to confuse Japanese batters for the second straight night. Sydney Romero (Temecula, Calif.) and Alyssa Palomino (Mission Viejo, Calif.) broke the game open in the fifth with timely hits. Team USA would never look back from there, as they kept pouring on runs. Homeruns from Palomino and Romero late in the seventh started the celebration.

“Being with this team all summer, we’ve been learning from each other,” said Palomino. “Coming into this week, we needed to come together one last time. That’s exactly what we did. Coming into this Championship Game, I started off slow so I needed to sit back, relax and focus on what we’ve been working on all summer.”

Palomino shattered several records at the 2015 WBSC JWWC. The previous record for most RBI was Team USA’s Stacey Nuveman (La Verne, Calif.) in 1995 with 18, as Palomino had 27. She also tied Nuveman’s 1995 record of five home runs in the Championship. Palomino went 2-for-4 today, scored once and brought in two RBI.

“It feels pretty good to set records,” said Palomino. “I was told after the game that I did, but honestly that wasn’t my goal. Winning the Gold Medal was all that mattered.”

Barnhill threw 99 pitches as she went the distance, striking out 11 and allowed only one earned run.

“This summer has been an amazing experience,” said Barnhill. “I’ve seen these girls in travel ball and many have seen one another in college. Getting to know these girls and to play for USA has been an honor. Tonight we came together and showed everyone what Team USA is made of.”

This was the fifth time that Team USA won the JWWC, tying Japan for most first place finishes. On the year, Team USA finished 14-4 in international competition, as they competed in the World Cup of Softball X and the WBSC JWWC.

Kyouko Ishikawa went 4-for-4 at the plate, helping Japan to a 5-1 victory over Puerto Rico to earn them a rematch against the United States in the Gold Medal Game.  With the loss, Puerto Rico finished the WBSC JWWC with a bronze medal, their highest placing at a WBSC JWWC in program history.

Japan took the lead in the first inning after scoring on an RBI single from Yui Sakamoto and never looked back.  They would tack on another two runs in the second, one run in the fourth and one in the fifth inning.  Haruka Fukui was a force to be reckoned with in the circle, going the distance with three strikeouts and one run allowed in seven complete innings.

The lone run of the game for Puerto Rico crossed the plate in the seventh inning on a sacrifice fly by Sabrina Stutman.  Meghan King suffered the loss for Puerto Rico, issuing six strikeouts while allowing five runs to cross the plate.

Australia and Chinese Taipei exchanged the lead five times in the Placement Division Championship, but Australia came out on top for a 5-4 win thanks to a three-run home run by Kalina Stepto.

Chinese Taipei threatened to tie up the game in the top of the seventh, scoring twice to bring the game within one run, but Australia's Stephanie Trzcinski entered to close out the game, recording the save.

Fans can re-watch some of the action at the WBSC JWWC by visiting the tournament website at 2015JWWC.com

.  The WBSC JWWC will return to the U.S. again in 2017 as Clearwater, Fla. will host the 12th edition of the international 19-under event.

Fans can continue to follow along with the latest from Team USA at asausasoftball.com.