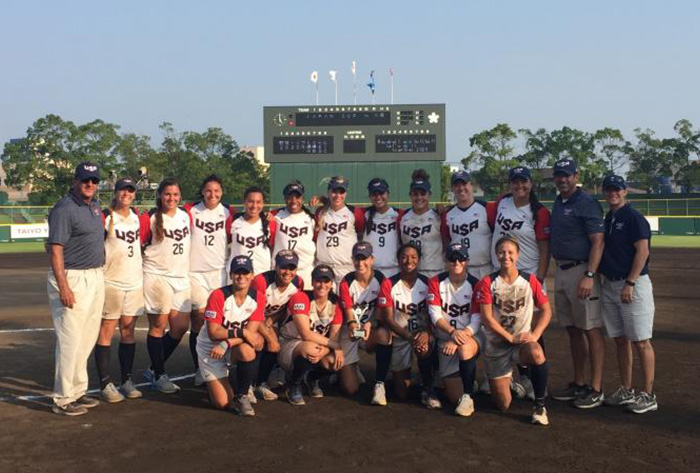 OGAKI, Gifu, Japan  — Team USA ended their 2015 season with a Gold Medal finish at the 2015 Japan Cup following a 2-1 (eight inning) thriller over tournament hosts Japan the Amateur Softball Association (ASA)/USA Softball announced today.  With the game scoreless through regulation play, the U.S. plated two runs in the top of the eight off a two-run double from Michelle Moultrie (Jacksonville, Fla.) while Ally Carda (Elk Grove, Calif.) shined from the circle to earn the title of tournament MVP.

Click here for live stats, box scores and more from the Japan Cup

"I thought our team learned a lot from yesterday's game and took that into today," said Head Coach Ken Eriksen (Tampa, Fla.).  "We always know it's going to be a great game against Japan and that it'll come down to who makes the least amount of mistakes and who capitalizes on plays.  Yukiko Ueno is a tough pitcher to face and I thought our hitters were able wait it out and find their pitches to hit.  I thought that this tournament, being a precursor to hopefully the WBSC World Championships in 2018 and the 2020 Tokyo Olympics, had a great show put on by all four teams.  Hopefully this shows the world that softball belongs in the Olympics."

Both sides would get their leadoff batters on base in the first inning as Raven Chavanne (Thousand Oaks, Calif.) singled for the U.S. and a hit batter put the leadoff batter on for Japan.  Both sides used their defenses to get out of the inning unscathed to keep the game tied up at 0-0.  Valerie Arioto (Pleasanton, Calif.) led off the top of the second inning with a hard hit ground ball single to the third baseman but the next three batters were retired to bring Japan back to the plate.  The U.S. defense would get put to work in the bottom half of the inning as Japan would load the bases with two outs, but a pop up to Lauren Gibson (Pasadena, Md.) at second base got the U.S. out of the jam.

Heading into the top of the eighth, Haylie McCleney (Morris, Ala.) started at second base due to the international tie-breaker (ITB) rule.  A popup kept McCleney at second before she advanced to third base on a single from Kelsey Stewart (Wichita, Kan.), who was able to wheel her way to second on the throw from the outfield.  Down to a 1-2 count, Moultrie smoked the ball over the left fielders head for a standup double to plate McCleney and Stewart to give the U.S. the 2-0 lead.

Japan's Kaoru Matyoshi started at second base in the bottom of the eighth and advanced to third on a groundout to Gibson at second base.  A sac fly to Janie Takeda (Placentia, Calif.) in left field would plate Matyoshi to cut the lead in half with two outs.  Needing just one out to pick up the win, Japan's Natauko Sugama connected for a hard hit fly ball down the left field line that looked to fall, but the speedster Takeda made the game-ending snag with the U.S. taking the 2-1 (eight inning) win.

Moultrie had a day at the plate, going 1-for-3 while picking up both of Team USA's two RBI.  Chavanne also had a great performance at the plate, finishing the game with a 2-for-4 outing.

Carda earned the win for the U.S., going the full eight innings with three walks, six hits and zero runs allowed while also picking up two strikeouts.  Ueno suffered the loss, issuing six strikeouts, seven hits and one run through her eight innings of work.  Carda was also named the 2015 Japan Cup MVP for her efforts during the tournament, finishing with a 0.00 ERA, one win and eight strikeouts through 14 innings from the circle.

The Japan Cup marked the end of the 2015 season for the Women's National Team, who finished the summer with a 16-3 record while claiming a Pan American Games silver, a World Cup of Softball Gold and the Gold at the Japan Cup.  Chavanne led the way offensively on the year with a .462 batting average and Carda notched a .38 ERA to lead the pitching staff.