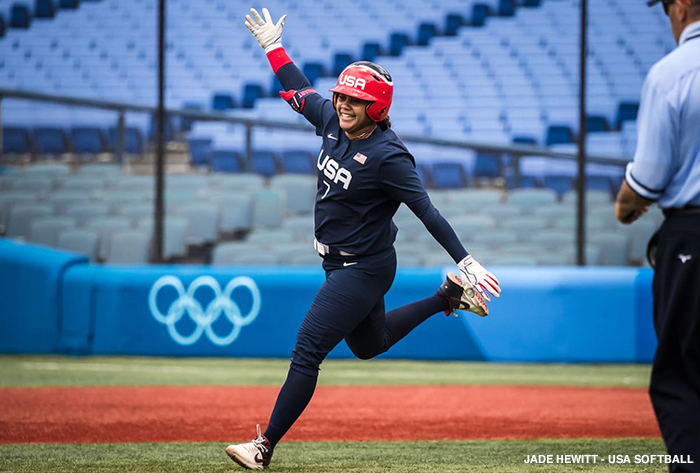 Following the final day of the 15-game opening round, the United States and Japan finished atop the standings and will meet for the gold medal at Tokyo 2020 Olympic Games. Mexico and Canada will face off for the bronze in the first-ever medal round game for both countries.

With USA’s 2-1 walk-of victory over Japan, the Eagles will be the home team in the rematch. Kelsey Stewart provided the heroics for the US with the walk-off homer against Yamato Fujita in the bottom of the seventh.

"I was just trying to get comfortable," said Stewart about her final at-bat. "I was lucky that the ball was like a beach ball today; I had a good day. I was just going up there trying to get a single and just got a good piece of it. It was like something you dream about as a little kid. A home run at the Olympics, let alone a walk-off."

USA and Japan square off at 7 a.m. ET on June 27 with the bronze medal matchup preceding at midnight ET. Both games will be televised on NBC Sports Network.

US head coach Ken Eriksen said: “To think that in March of 2020 there may have been the chance of the Olympics not happening and here we are in the gold medal match versus a great program in Japan. I don’t think you could ask for a better opportunity to play on the world stage.”

In what was essentially a bronze medal play-in game, Mexico knocked out Australia, 4-1, to set up a battle with Canada. Australia leaves the event in fifth place. Following the game, Aussie legend Stacy Porter announced her retirement. It marked the first time in history Australia will not play for a medal in an Olympic softball tournament.

Canada wrapped up its opening round with an 8-1 win over Italy, who exited the tournament in sixth place. Canada topped Mexico, 4-0, in the opening round.

Mexico ace pitcher Dallas Escobedo said: "Tomorrow is just another day. We go out and compete how we can. We've got better every single outing we've had, so continue that train and hopping on."

Canada head coach Mark Smith said: "There’s not a lot to learn to be honest with you...As far as preparing for the opposition, they know us as well as we know them."