USWNT arrives in Japan ahead of Tokyo 2020 Olympic Games 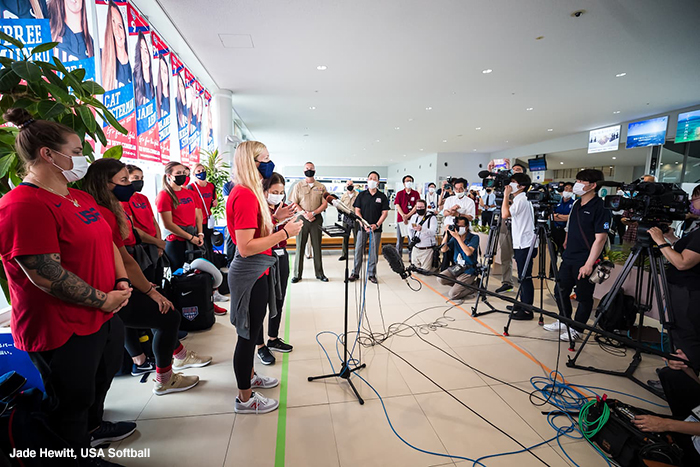 IWAKUNI, Japan –– Coming off the conclusion of the “Stand Beside Her” tour, presented by Major League Baseball (MLB), the USA Softball Women’s National Team (WNT) arrived in Iwakuni, Japan to close out its pre-Olympic preparations with a series of training sessions and exhibition games held at Atago Sports Complex July 6-13.

Courtesy of the hospitality and efforts made by the City of Iwakuni and Marine Corp Air Station (MCAS) Iwakuni, the Red, White and Blue will train and compete in a series of doubleheaders against Japan professional softball teams July 9-13, before traveling to Tokyo where Team USA will begin its quest for a fourth Olympic Gold Medal at the Tokyo Olympic Games scheduled for July 21-27.

“We are so fortunate to have great relationships with the City of Iwakuni, the people of Iwakuni, and with the Marine Corp Air Station Iwakuni,” said Women’s National Team Head Coach, Ken Eriksen. “They have provided us with many opportunities to train while we have been in Japan over the last 3 years, including our preparations for the 2018 World Championships where we qualified for the Tokyo Olympics. We are excited to be back and are looking forward to seeing our friends as we prepare for the Olympic Games.”

Exhibition matchups kick off on Friday, July 9 with a doubleheader against Iyo Bank Vertz followed by three more twinbille scheduled for July 11-13 against Toyota Terriers and Hitachi Sundiva. Fans across the globe will have the opportunity to follow along with each game via live stats. A full schedule and link to live stats can be found at USASoftball.com.

The City of Iwakuni is located 436 miles from Tokyo and houses the Atago Sports Complex, which will serve as the site for the training camp. Previously, the City of Iwakuni and MCAS Iwakuni hosted the WNT in July 2018 prior to the World Baseball Softball Confederation (WBSC) Women’s World Championship in Chiba, Japan. The six-day training camp provided the squad the opportunity to conduct rigorous workouts and practices prior to the Olympic-qualifying tournament. Practices were made public for citizens of Iwakuni, service members and family at MCAS Iwakuni, while members of the WNT also participated in a local clinic for students. The U.S. ended their stay by playing a doubleheader against Japanese professional team, Toyota Red Terriers, before going on to win Gold and qualify for the Tokyo 2020 Olympic Games.

Following training and exhibition gamesi, Team USA head to Tokyo on July 14 for the highly-anticipated Tokyo 2020 Olympic Games, where the sport of softball returns to the Olympic stage for the first time since 2008. Re-sparking the Olympic Dream for millions of softball athletes and fans across the globe, the Tokyo 2020 Olympic Games will mark Team USA’s fifth Olympic Games appearance after finishing atop the podium in 1996, 2000 and 2004 and earning the Silver Medal in 2008. The top-ranked U.S. WNT joins No. 2 Japan, No. 3 Canada, No. 5 Mexico, No. 8 Australia and No. 10 Italy as the six teams who will vie for the Gold Medal starting July 21-27. A full schedule of the Tokyo Olympic Games can be found at USASoftball.com with television channels and times being released at a later date.