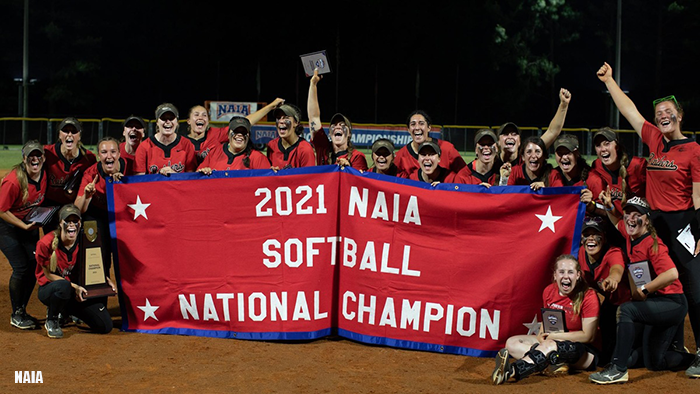 COLUMBUS, Ga. – Southern Oregon battled though the elimination bracket, winning five games straight to earn the 2021 NAIA National Championship. Capturing the Red Banner for the second straight season, the Raiders (55-6) defeated Oregon Tech, 3-2, forcing the if necessary game and then defeated the Owls (48-10), 7-5 in nine innings to claim the second victory.

In the deciding game, Southern Oregon used the momentum from their win to take an early 2-0 lead in the first inning on back-to-back RBI singles by Tayler Walker and Ryland Austin.

With SOU up 5-1 and needing one final out in the bottom of the seventh, Oregon Tech mounted a comeback to send it into extras. With two on and two out in a four-run game, consecutive walks followed by consecutive Krista Ward and Kennedy Jantzi RBI singles cut the lead to one. A bases loaded-walk forced in the tying run.

Riley Donovan, the 2021 World Series MVP, led off the top of the ninth with a go-ahead solo home run over center field fence. An Olivia Mackey triple, preceded by Tayler Walker's single, yielded an insurance run for the Raiders, making it 7-5.

Over seven games at the World Series, Donovan went 11-for-17 with two home runs, two doubles and eight RBIs.

The score remained 1-1 in game one until the bottom of the fifth when Southern Oregon broke through for two runs. Avery Morehead-Hutsell started the Raiders off with a single to short and then Hannah Shimek, Lauren Quirke and Riley Donovan for four straight singles. Quirke's and Donovan's base knocked drove in a run. The Owls attempted comeback in the top of the seventh, but fell short. McKenna Armantrout singled through the gap to bring Olivia Lethlean home to make it 3-2. However, Gabby Sandoval (32-4) induced a pop up with the bases loaded to force the if-necessary game.

The two teams both call the state of Oregon home with their campuses separated by just 66 miles. The Cascade Collegiate Conference rivals played on the big stage Wednesday night, marking the first conference matchup in the national championship game since 2014. This was also the first championship game to go to extra innings since 2012.

The Most Valuable Player